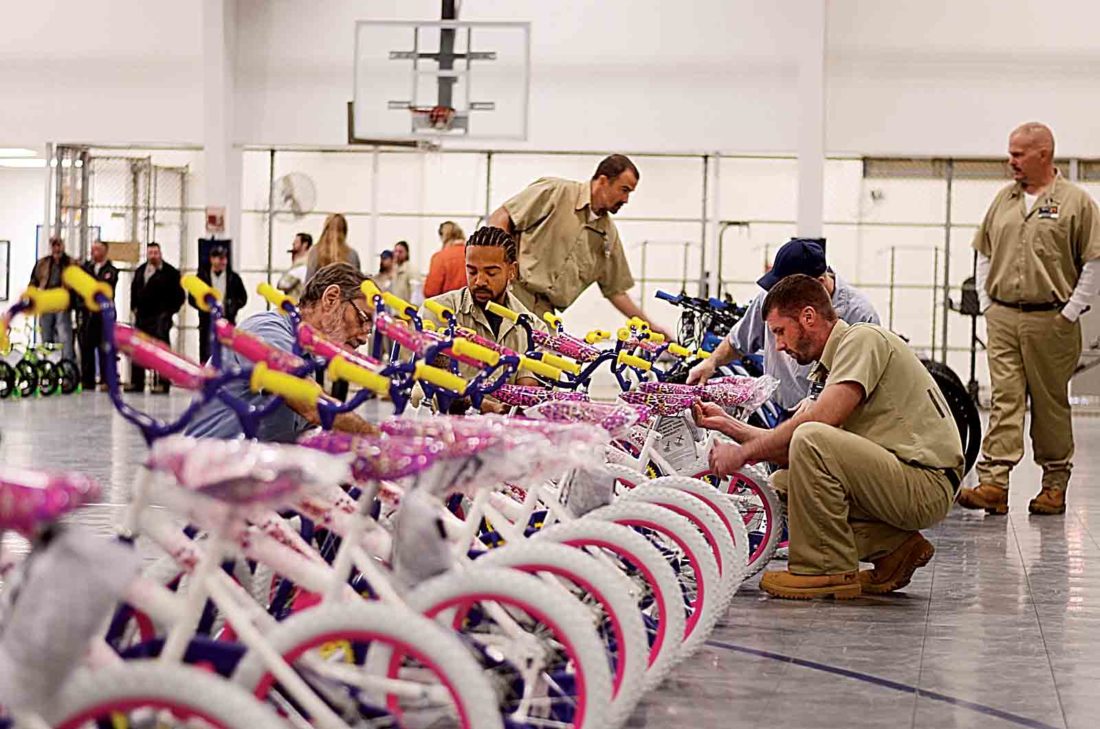 Photo by Hannah Kittle Inmates work on bikes during a bike build at the Noble Correctional Institution on Wednesday.

CALDWELL — This Christmas, foster children throughout Southeastern Ohio will be rushing to the bottom of their Christmas trees to find a shiny, brand new bicycle as the Noble Correctional Institution is partnering with Bike Lady to build and send out bikes across seven counties.

Inmates and staff teamed up Wednesday for a big bike build, putting dozens of bikes together all at once.

“This is the first one we’ve done,” said Noble Correctional Institution Warden Tim Buchanan. “Bike Lady) came to us looking for participation to cover Southeastern Ohio and we said absolutely.”

Bike Lady is a nonprofit organization that works with Ohio at-risk youth by providing new bikes, helmets and locks to children who have a history of abuse, neglect or abandonment and are also placed in foster care. The organization was formed in 2008 as an impromptu bike-a-thon and grew from there.

Buchanan said when they first presented the idea, the inmates at the Noble Correctional Institution were eager to participate by building bikes.

“There is a big buzz about it in the compound,” said Buchanan. “They fought for it to be able to do it.”

He said 10 staff and 20 inmates put the 155 bikes together Wednesday for the children in foster care in Southeastern Ohio. He said 41 of those bikes were going to Washington County to assist the children there.

“We really hope to be involved in this annually and use this as a springboard for any community that needs us,” he said.

“It took approximately an hour and a half to build the bikes,” he said. “We used our maintenance crew and our garage crew and they will be delivered by our special response teams – they stepped up and wanted to be the ones to deliver them.”

He said they should be delivered to the various county child protective services in Southeastern Ohio by the middle of next week.

“I think anytime we have an opportunity to give back, especially with the inmates, we should,” he said. “Yeah, they made a mistake to get into prison, but while they were here, they did something right, so when they asked if we wanted to get involved, we not only said yes, but yes, yes, yes.”

Homer (only a first name was provided when speaking to the inmates), an inmate at the Noble Correctional Institution, said he really enjoyed helping build the bikes on Wednesday for the foster children.

“We did it just to give back to kids and we’re in prison, so it’s something we can do,” he explained. “There aren’t many ways to help children while in prison, so when you see something like that come along, you do it.”

The bikes put together in the Noble Correctional Institution were distributed to seven counties in Ohio, including Guernsey, Muskingum, Morgan, Noble, Belmont, Washington and  Monroe counties.

“Knowing it’s going to make good Christmases for some kids is a good feeling,” said Homer.

Chris, an inmate at the Noble Correctional Institution, said it’s nice to be able to help in any way they can.

“It’s definitely a change from everything else that happens in here,” he said. “It makes you feel like an actual person again.”

Burris said they hope to continue to be a part of the program and help the communities in Southeastern Ohio in any way they can.

“I was a foster parent and for me, especially since I had three foster children who I have now adopted, it is special to me for that reason,” he said. “They are going to better a little kid’s Christmas this year.”

Homer said as a parent, the project was especially important to him.

“I have kids and if my kids were in that situation, I would want someone to do that for them,” he said.

He added it’s a memory he wants to take with him when he gets out.

“That’s something I’ll always remember,” he said. “That’s the one part of prison I’ll actually want to remember.”