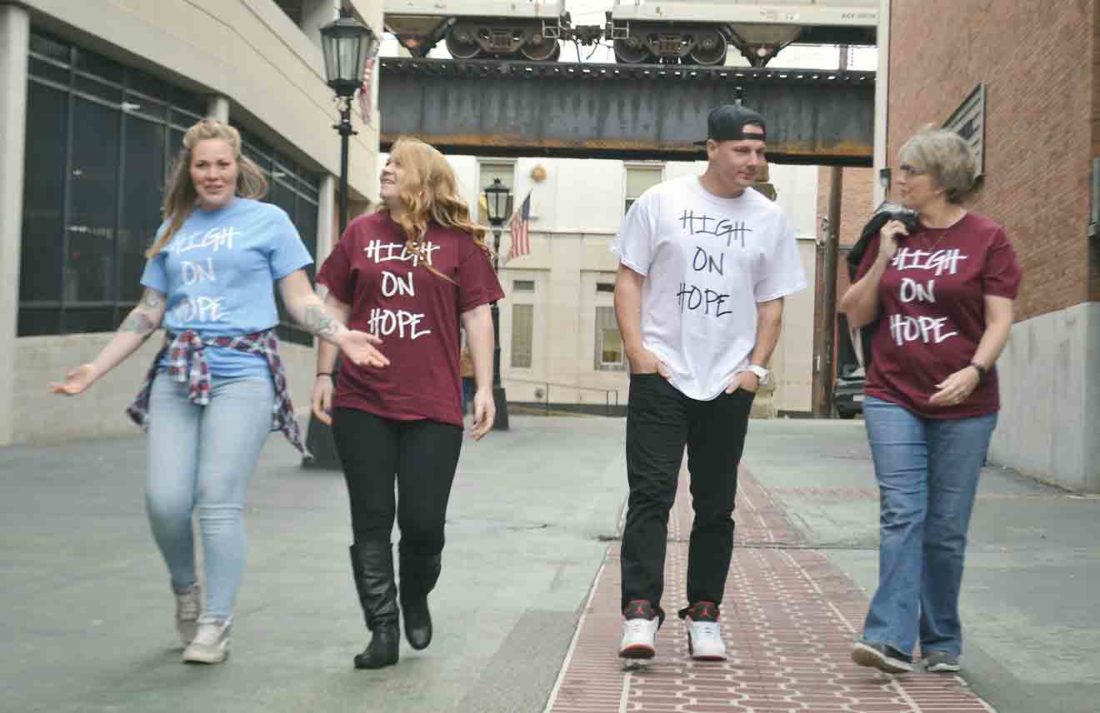 PARKERSBURG — Drug abuse is an epidemic levels here and across the nation, but there is hope.

Mid-Ohio Valley DreamLife is being a positive light to those recovering from drugs with its High on Hope campaign. DreamLife is a one-year discipleship program helping young adults coming out of addiction.

DreamLife member Sharown Sammons, 22, of Marietta came up with the idea behind the campaign.

“We were brainstorming ideas for a new T-shirt design and then I thought, it seems as if people this day and age are high on some kind of drug, so I thought why not be high on hope,” said Sammons. “When you’re in the presence of God, you get such a high.  It’s the best feeling ever.”

Sammons was addicted to drugs for three years before joining DreamLife, and has now been sober for five months.

“I want people to know that there is light and there is a way to get out even when it’s the hardest thing to overcome,” she said.

Craft said he saw a need in the area and wants to offer a solution to their problem.

“We understand that the solution is actually much bigger than the problem,” said Craft. “As negative as it can seem sometimes, we believe we can see this all turn around.”

Craft said the first High on Hope movement will on April 8 at the City Park in Parkersburg beginning at 1 p.m.

“We are expecting it to be a big event,” said Craft. “Starting next spring or summer, we would like to do them in Huntington, Marietta, Charleston and Beckley.”

With good music and inspiring testimonials, Craft hopes to see the movement’s radiating light of positivity transcend to those listening at the event.

“We only see the negative side of addiction,” said Craft. “We don’t actually get to see the success stories as much as we see the overdoses. We want to push the positivity and hope into people’s eyes.”

Craft said DreamLife will be partnering with other organizations such as Dave Zide and Reliance Treatment Centers for the movement events.

Pastor Janet Richards has been involved with DreamLife for 14 months, and though at times it’s been challenging, she wants people to know that there is a light at the end of the tunnel.

“There is a high higher than any drug, any alcohol or any substance, and his name is Jesus,” said Richards. “It’s a challenge but it’s not too big of a challenge for Jesus.”

Lori Workman, 28, of Marietta also is a member of DreamLife. She was addicted to drugs for six years.

Workman has now been sober for a year and half, and is proud to share her journey.

“The outreach continues to give me hope and faith,” said Workman. “I feel better being able to reach out to people and letting them know that there is hope.”

Through this movement, Craft said he also wants to reach out to the families who have been effected by drug addiction in some kind of way.

The organization will be selling their High for Hope t-shirts at the Downtown Bethel Church and online at movdreamlife.org for $15.

DreamLife is currently accepting applications for their new session in January for those who are interested in becoming a part of their one-year program.