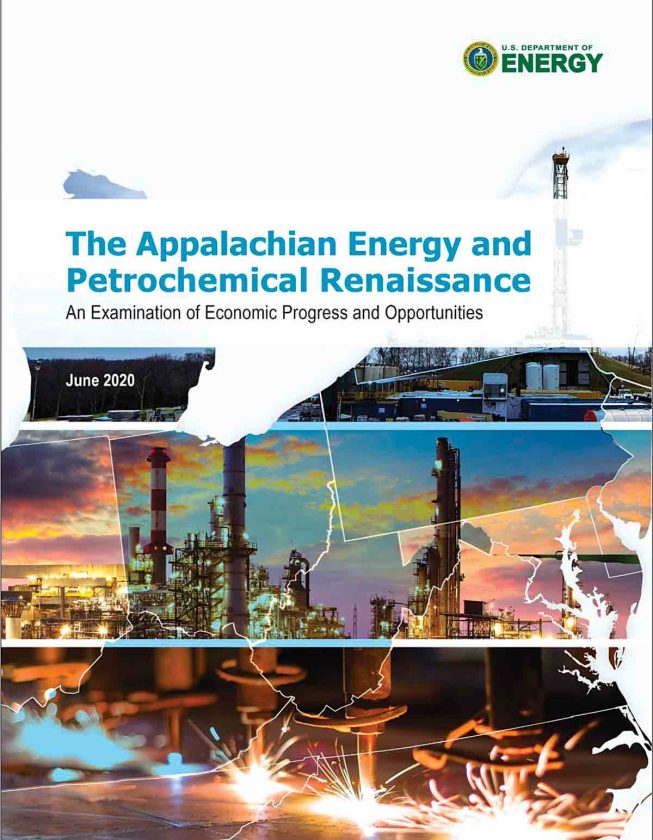 The “Appalachian Energy and Petrochemical Renaissance” was released in June by the U.S. Department of Energy. It examines potential economic growth in the Appalachian Region from the development of shale energy sources. (Image Provided)

PARKERSBURG — Reliable and affordable energy will have a key role in the economic recovery after the pandemic, according to a new report by the U.S. Department of Energy about the benefits to the region and the country of shale gas development.

“Appalachian Energy and Petrochemical Renaissance: An Assessment of Economic Progress and Opportunities” examines potential economic growth in the Appalachian Region from the energy, petrochemical and manufacturing sector, public and private infrastructure and the workforce.

The 63-page study was written by the Department of Energy with the federal Appalachian Regional Commission, the U.S. Army Corps of Engineers, the departments of Agriculture, Commerce, Labor and Transportation and the Small Business Administration.

“As identified by the COVID-19 health crisis, there is recognition of the importance of domestic production of products made from petrochemical products including plastics for the safety and health of Americans – masks, ventilators, gowns, etc.,” he said. “The DOE study shows that Shale Crescent USA and the larger Appalachian Region have the resources and manufacturing potential to manufacture products in American while creating tens of thousands of high wage jobs.”

While the nation has abundant sources of energy, infrastructure that is capable of safely and efficiently transport the energy to residential, commercial and industrial markets is needed, the report said.

“Without this infrastructure, energy costs will rise and the national energy market will be stifled, job growth will be hampered and the manufacturing and geopolitical advantages of the United States will erode,” the report said.

“The energy-rich Appalachian region is now the single largest natural gas producing region of the country and increasingly is becoming a major producer of natural gas liquids, including ethane, propane and butane. The region also saw improvement in its coal production during 2017 and 2018 for the first time in a decade,” the report said. “Recognizing that the abundance of Appalachian energy resources is an engine for economic growth, the Executive Order directed the Secretary of Energy, in consultation with other agencies, to assess opportunities for promoting continued economic growth within the Appalachian region.”

The report is a clear recognition by the Department of Energy of the tremendous economic opportunity in the Shale Crescent USA Region for energy-intensive businesses, Kandel said.

“This opportunity has been created by the shale gas revolution and the DOE is calling for all levels of government to help attract private sector capital in four specific ways: creating a pro-business environment, improving public infrastructure, workforce development and encouraging innovation,” he said.

West Virginia, Ohio and Pennsylvania, if the three states were a country, would be the world’s third largest natural gas producing nation, Kandel said.

“The report highlights Appalachia’s abundant supply of energy as a significant opportunity to further grow regional manufacturing. This is true,” he said. “There are currently 630,000 manufacturing jobs in Northern to Central Appalachia, representing 13 percent of the overall direct jobs market in the region, as well as a significant number of support sector jobs.”

The American Chemistry Council said the opportunity in the petrochemical sector alone could result in an economic expansion of $28 billion per year and result in the creation of more than 100,000 jobs in the region, he said. Manufacturing job opportunities will go beyond petrochemicals, Kandel said.