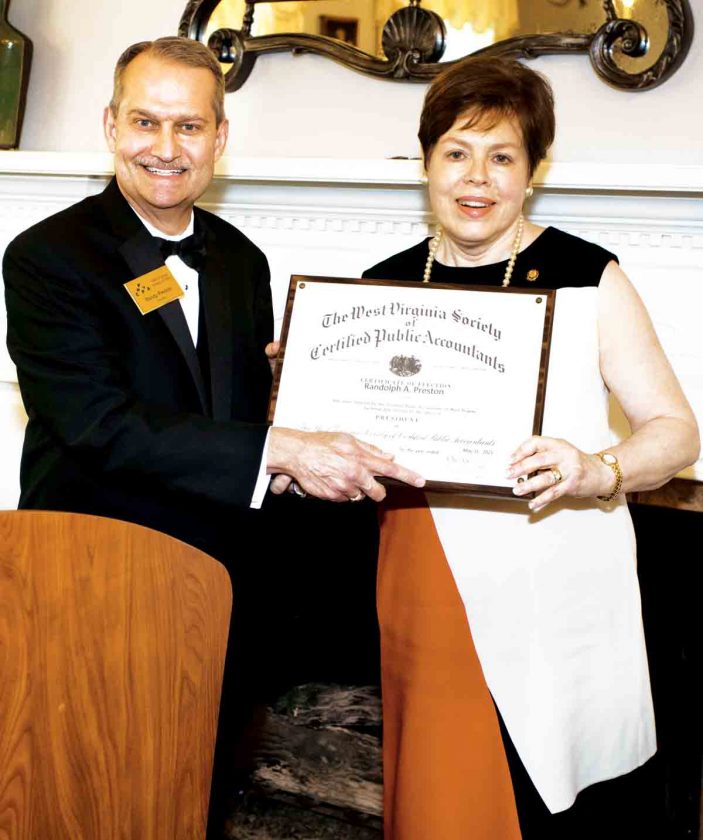 PARKERSBURG — Randy Preston was installed this week as the 102nd president of the West Virginia Society of Certified Public Accountants, the fifth member of the Parkersburg firm of McDonough, Eddy, Parsons & Baylous to hold that position.

Preston, who has worked for the firm for 36 years, said it’s an honor to follow in the footsteps of Ed McDonough, Kathy Eddy, Robin Baylous and the late Darrell Baylous.

“Those four are on my personal Mount Rushmore,” he said in his speech Wednesday.

While the new president is usually installed at the society’s annual meeting at the Greenbrier, because of the COVID-19 pandemic, this year’s meeting was conducted virtually using the Zoom app.

“Ed McDonough, our managing partner, said, ‘I want to give you as much of the Greenbrier as possible,'” Preston said.

So the firm participated via Zoom at a reception Wednesday at the Parkersburg Country Club. Members of Preston’s family who could not attend were also able to view the meeting.

Preston joined the group soon after being hired at McDonough, Eddy, Parsons & Baylous and has served on various committees over the years. He became a member of the board of directors in 2013 and was asked to go through the offices of secretary/treasurer and president-elect before assuming the presidency.

In his speech, a copy of which he provided to The News and Sentinel, Preston described himself when he entered the profession as an introvert.

“If you had known me 30 years ago, I can assure you that you would never have imagined me standing up here today,” he said.

Preston said the society has been a benefit to him professionally and he looks forward to leading it over the next year, in whatever form that might take.

The president usually visits all six geographical chapters to discuss the society and the profession. In many cases, students from the area are invited to attend “and hear, real world, what’s going on,” Preston said.

With the uncertainty surrounding the pandemic, those gatherings may have to happen virtually as well, he said.

The firm is proud of Preston and his accomplishments, partner Ben Poling said.

“This further proves his dedication to the society, as well as our profession,” Poling said. “His leadership is a great example for all CPAs to follow.”