Chef Thomas Hickey places seared scallops and mushrooms on a bed of wilted spinach and risotto while next to Sous Chef Steve Harris at The Buckley House in Marietta. (Photo by Janelle Patterson)

Chef Thomas Hickey drizzles a cream sauce over Wednesday’s special at The Buckley House in Marietta. (Photo by Janelle Patterson) 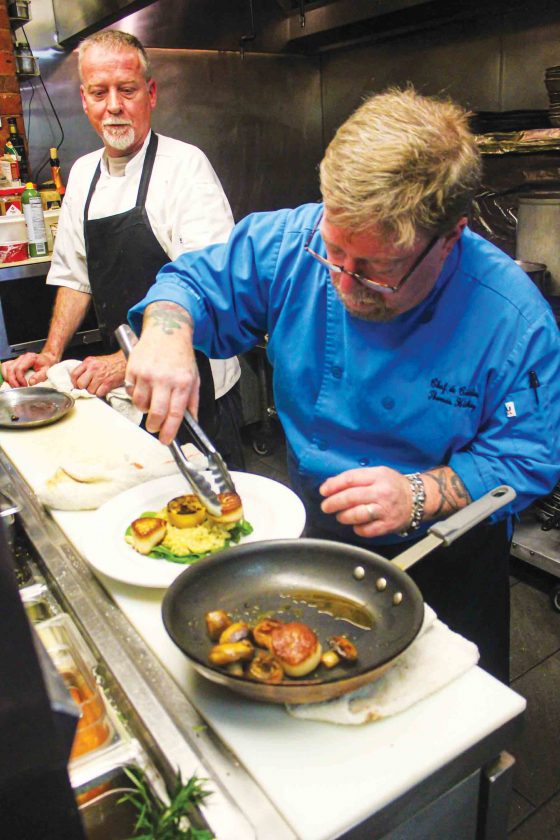 Chef Thomas Hickey places seared scallops and mushrooms on a bed of wilted spinach and risotto while next to Sous Chef Steve Harris at The Buckley House in Marietta. (Photo by Janelle Patterson)

MARIETTA — One week in, one week to go, before the tutelage of the famed Chef Emad Al-Masri concludes and the familial team of Jeff and Julie Brown with Chef Thomas Hickey are on their own to carry on the legacy of The Buckley House.

“We’ve been talking about this for a couple months, I really owe so much credit to Karen Strahler,” said Jeff, 38, of Marietta. “We bought our house in Marietta in April and I was telling Karen about my dream, the business plan to open a restaurant. She said she wanted me to meet her — just gave me an address and I brought along my chef — and by the end (I) just said (to him), ‘hey if I buy this will you be mine?'”

The sale was official last Wednesday, and within that week, the staff have been running, keeping the popular fish and hummus, but also adding the French cuisine Chef Thomas Hickey is known for from his time at the Lifestyle Hotel and the Brotherliness Hotel.

“Chef Emad has been amazing and has agreed to stay for just two weeks with my chef, sharing his staples and then packing up and moving on next Wednesday,” Jeff said.

But Hickey said not to worry. 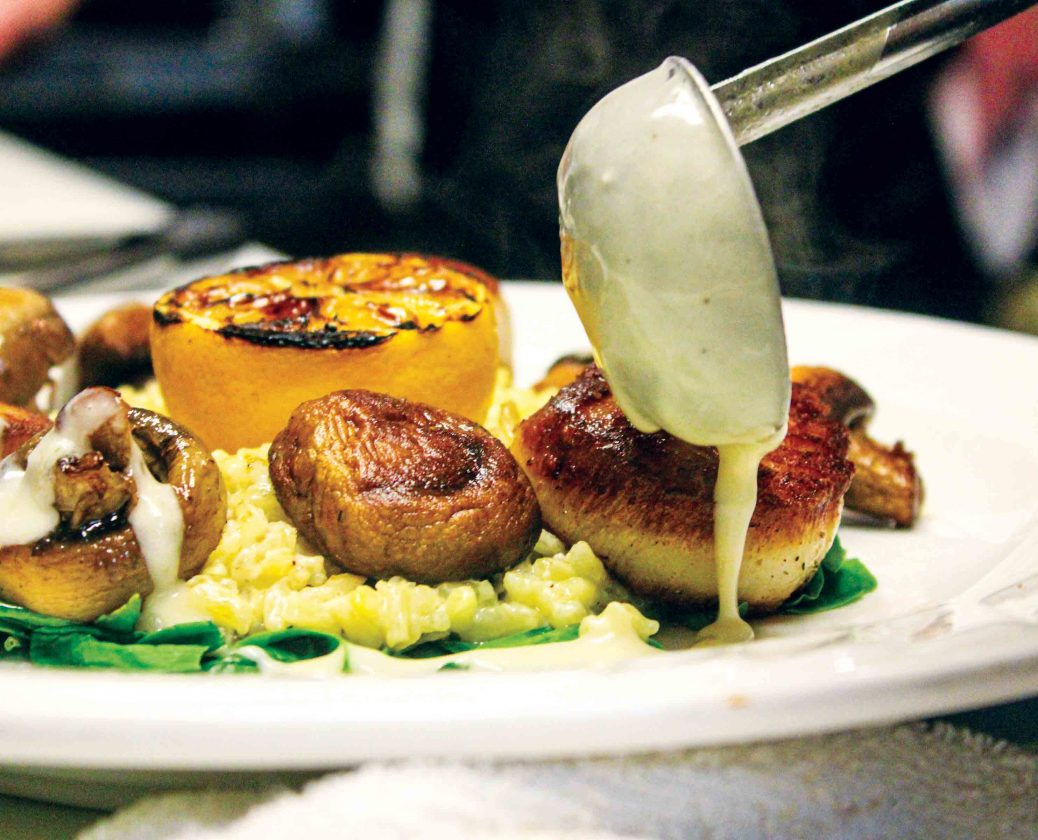 Chef Thomas Hickey drizzles a cream sauce over Wednesday’s special at The Buckley House in Marietta. (Photo by Janelle Patterson)

“Yes, Emad’s shoes are big ones to fill but I think my shoes are just about his size,” he said as he laughed and went to work on Wednesday evening’s special — a scallop and mushroom risotto over wilted spinach and topped with a cream sauce.

“I’m excited to keep the fresh fish he was known for and has been doing well and bring some more French flavors to the menu, expand the salads and add some seasonal spins to dessert,” he said.

Hickey, originally from Boston, said he’s been in a kitchen since he was 16.

“Line, to sous chef, executive chef, managing a whole staff and catering two restaurants, but this, this reminds me of when I was a chef at this little old inn in Vermont that had a very Greek, small feel to it,” Hickey said. “The kitchen size is more intimate and I’m touching every plate and thinking more about wine pairings and the matching flavors that compliment the palate.”

Meanwhile Julie Brown, 26, is thinking of how to make the upstairs home into a whole event suite for brides and grooms.

“So they can stay separately but be in the same location, really have that full experience here,” she said.

Jeff said work will continue into the outdoor space facing Front Street and in the back patio with the gazebo.

“I basically want everywhere the bride looks to be a place she wants a photo,” he said.

The pair are now working to finalize packages for rentals as they continue service with favorites and specials each evening but Sundays and lunch during the weekdays.