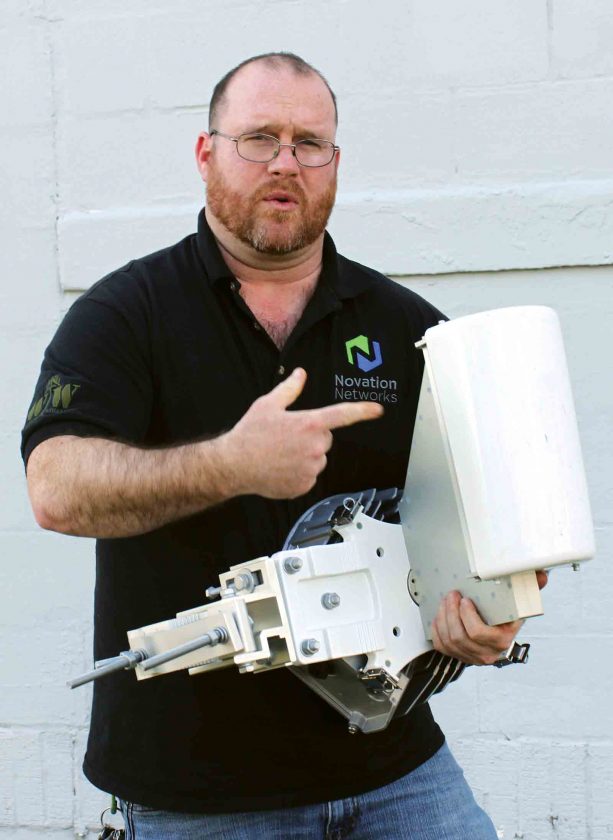 Bucky Hobbs, director of operations for Novation Enterprises, holds a 5G antenna at Fanelli Boys in Parkersburg where a new 5G wireless antenna was installed. Novation has a program for veterans to be trained in wireless technologies, skills that can be used with any company in the industry. Hobbs served in the U.S. Army. (Photo by Candice Black)

PARKERSBURG — A company is training veterans for a career in the wireless industry and plans on Parkersburg being the center of a larger instructional initiative.

Novation with American Legion Post 15 in Parkersburg plans to establish a training program and classes on wireless infrastructure for veterans, Dunne said. The anticipated start of the program will be in June, he said.

The program will be free and veterans will be allowed to work for any company, Dunne said.

“The goal is to get the workers with other companies as well,” Dunne said.

Called small cell communications, the antennas are about a foot in diameter and, by line-of-sight, are between 5 and 7 miles apart, Dunne said. Communications with 5G can be as much as 100 times faster than 4G.

“Which is much faster than anything before,” he said.

It is a growing field and industry, Dunne said. In the next four to five years, 800,000 small cell systems will be deployed across America, he said.

The company has so far trained eight veterans in the program.

While other companies will have their own methods and processes, the training will teach veterans “the nuances of wireless” that can be used industry-wide, Bucky Hobbs, director of operations for Novation, said.

“It sets them up to work with any wireless company,” Hobbs said.

Hobbs is an 18-year infantry veteran of the U.S. Army. He has worked for Novation for more than two years.

Working in the wireless industry is more than a job, it is a career, which is important from the perspective of a veteran entering into the workforce, Hobbs said.

They are looking for a career “that is satisfying to them,” he said.