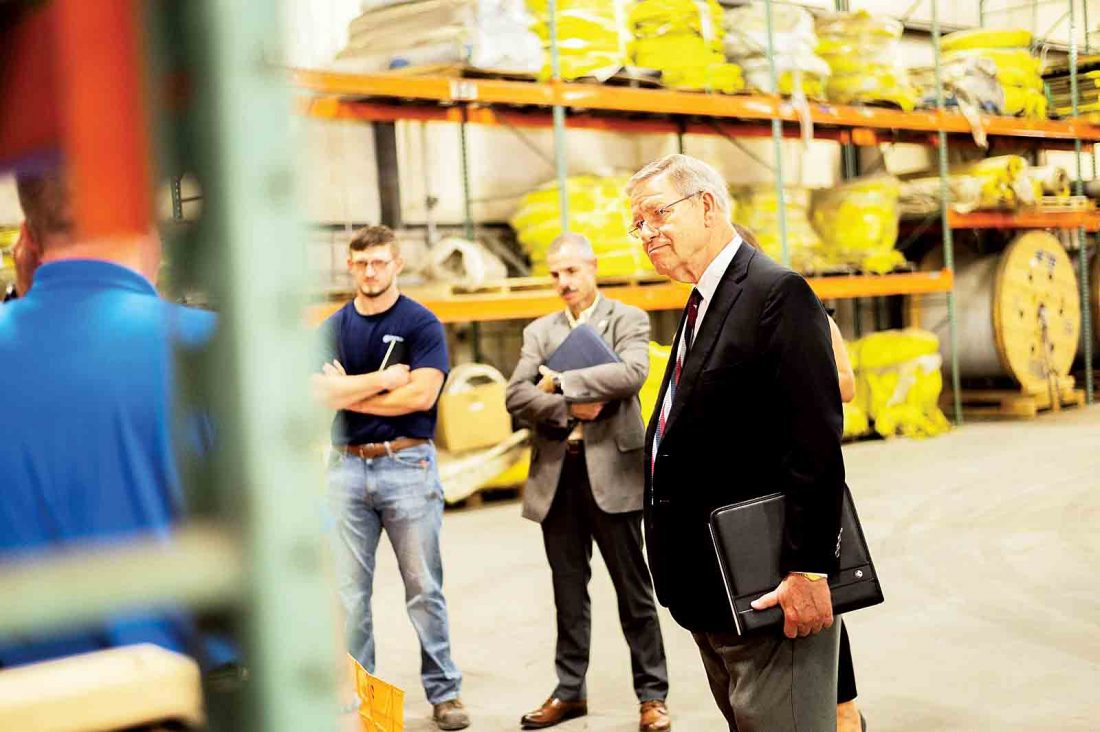 CHARLESTON — Nearly one year after being appointed as secretary of the West Virginia Department of Commerce, Ed Gaunch said the department is looking forward to another year of recruiting new businesses and helping established businesses thrive.

When visitors enter the department’s headquarters in Building 3 directly across from the State Capitol Building, they are greeted by a piece of art created by C. Paul Jennewein in 1950, titled “Spirit of West Virginia.”

The art deco piece shows the state represented by a woman surrounded by images of the state’s industry: farming, oil and natural gas, coal mining, and manufacturing. It’s fitting that the Department of Commerce would move into this building three years ago, which manages nine agencies tasked with recruiting and promoting the state’s business and industry.

“One of my goals has been to make sure that these nine agencies collaborate and make sure that we’re all striving for the same goals, and that is basically to create an environment where folks look at West Virginia as a good place to live, work and play, and to create an atmosphere where our children and grandchildren can have a future here,” Gaunch said in the department’s conference room directly across from the State Capitol Building. 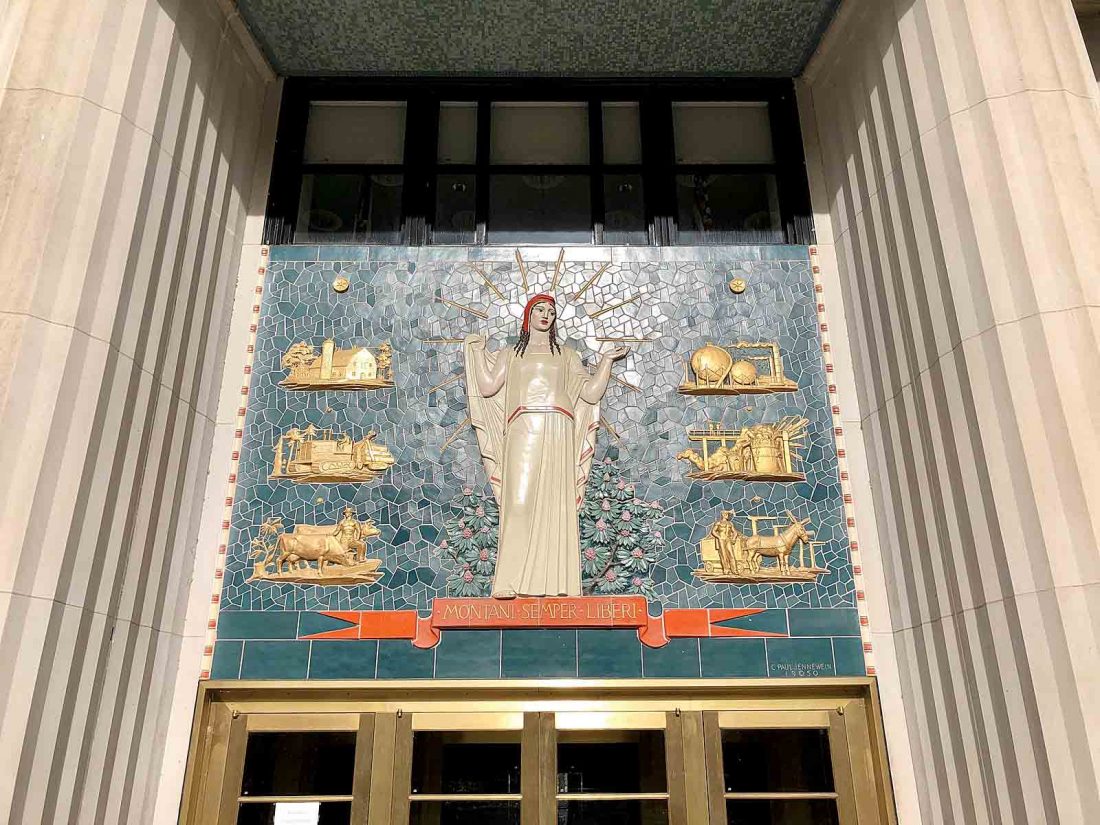 Gaunch said each agency has a different role, but all share similar missions that make each perfect for the Department of Commerce.

“This job is diverse and certainly not boring,” he said. “Close to 2,000 employees are involved in the nine agencies that are Commerce agencies, and although they are diverse and different, there’s a good reason I think that they’re all part of Commerce.”

Gaunch was elected to the West Virginia Senate in 2014 as part of the Republican wave that took both legislative chambers. He lost a close re-election bid in 2018 to Charleston attorney Richard Lindsay. Previous to his legislative services, Gaunch was a retired president and CEO for the Carson Insurance Agency.

Thrasher, previously a Democrat, switched to Republican in the spring and is challenging Justice for the Republican nomination for governor. Clayton Burch, an assistant superintendent at the state Department of Education, served as acting Commerce secretary from June 2018 to Gaunch’s appointment in December 2018.

Over the last few months, Gaunch has hit the road for a listening tour of the state’s businesses and industries. Gaunch has visited business both big and small, most recently in Roane and Jackson counties, to show his appreciation for active businesses that have stayed in the state. He has also used the tour to find out what these businesses need to continue to thrive.

“We’re going to continue to try to attract new businesses,” Gaunch said. “We’re hitting a lot of singles and doubles that we’ve had some really great successes, but how do we go about not overlooking the businesses who are already here?

“I call it celebration tour,” Gaunch continued. “What I do when I go in there is to say thank you for being here. Thank you for employing West Virginians. Thank you for contributing to our economy. What can we do to make life easier for you so that you can be more successful to help more or hire more West Virginians and what can we do to get government involved when it needs to be involved and out of the way when it needs to be out of the way? I come back with four or five good notes that help me plan programs and maybe even lead to legislation going forward.”

Gaunch recognizes that no one part of the state is the same as another. There needs to be a business and tourism strategy that is uniquely tailored for different parts of the state.

“One thing that I know for certain is we need a different strategy,” Gaunch said. “We can’t have the same strategy for McDowell and Wyoming counties that we do for Monongalia and Marion counties … or the Eastern panhandle. What I’m saying is we’ve had to be intentional about this and I’ve started that process.”

Natural gas, always an important part of West Virginia’s industry, became even more so the last decade thanks to fracking and horizontal drilling, allowing companies to produce greater amounts of natural gas. West Virginia’s economy has benefited from this growth, from royalty payments to mineral rights owners to greater severance tax revenue for the state and counties.

The Commerce Department, as well as other state agencies, are working on ways to maximize the potential the natural gas industry holds for the state. Gaunch is part of the Governor’s Downstream Jobs Task Force created in August. Gaunch believes the state will see at least one cracker plant – which breaks down ethane into ethylene. And with a cracker plant will come a revival of chemical manufacturing in the state.

“This is an opportunity. We can’t afford to fail, and we have to get this right,” Gaunch said. “We want a cracker. I think as much as anything, it will be kind of an emotional win for us. These things … don’t happen overnight, right? So, all the work we’re doing yesterday and today will hopefully pay dividends later.”

Gaunch recognizes that West Virginia’s energy resources are not enough. The state has to diversify its economy, and the best way to do that is to expand access to high-speed broadband internet.

Facebook broke ground in Beckley on Nov. 18 on a fiber line that will stretch from Virginia to Ohio going through Southern West Virginia. Another company, Zayo, announced a similar project last year that could go across the northern half of the state. The Legislature also passed several bills the last couple of years encouraging broadband expansion throughout the state, from cities to the last house at the end of the gravel road.

“We look at it as an infrastructure issue, just like highways or water and sewer,” Gaunch said. “It’s that critical. When we think about bringing businesses into West Virginia, connectivity obviously is a huge question for sure. We’re building that infrastructure now so that we can bring some of those businesses in and say, your site is ready. It has sewer, it has water and it has broadband. How can we get you to move in here?”

The Department of Commerce can point to a number of successes over the last few years. The Eastern Panhandle has seen Proctor and Gamble and Macy’s set up huge distribution centers. The aviation industry continues to grow, with a new program being developed at Marshall University. Tech companies, such as Infor in Charleston and Sparksoft in Fairmont, have set up shop in the state. The automotive industry remains healthy with the expansion of Hino Motors in Wood County and NGK Sparkplugs in Kanawha County.

Gaunch is proud of the accomplishments of the Department of Commerce and the growth of new industries and the success of legacy businesses. While he knows there is still much to do, he looks forward to what the next year will bring.

“We’ve had some great successes,” Gaunch said. “I think West Virginia’s future is great. I really do. I’m optimistic. I choose to be here. I love this job.”