Students from Waterford Elementary School examine machine tool attachments during a field trip to Micro Machine Works in Barlow. The eighth-graders were given a tour of the plant, which specializes in making precision parts. (Photo by Michael Kelly)

Precisely machined parts are arrayed on a table at Micro Machine Works in Barlow. The shop hosted a tour of Waterford Elementary School eight- grade students. (Photo by Michael Kelly) 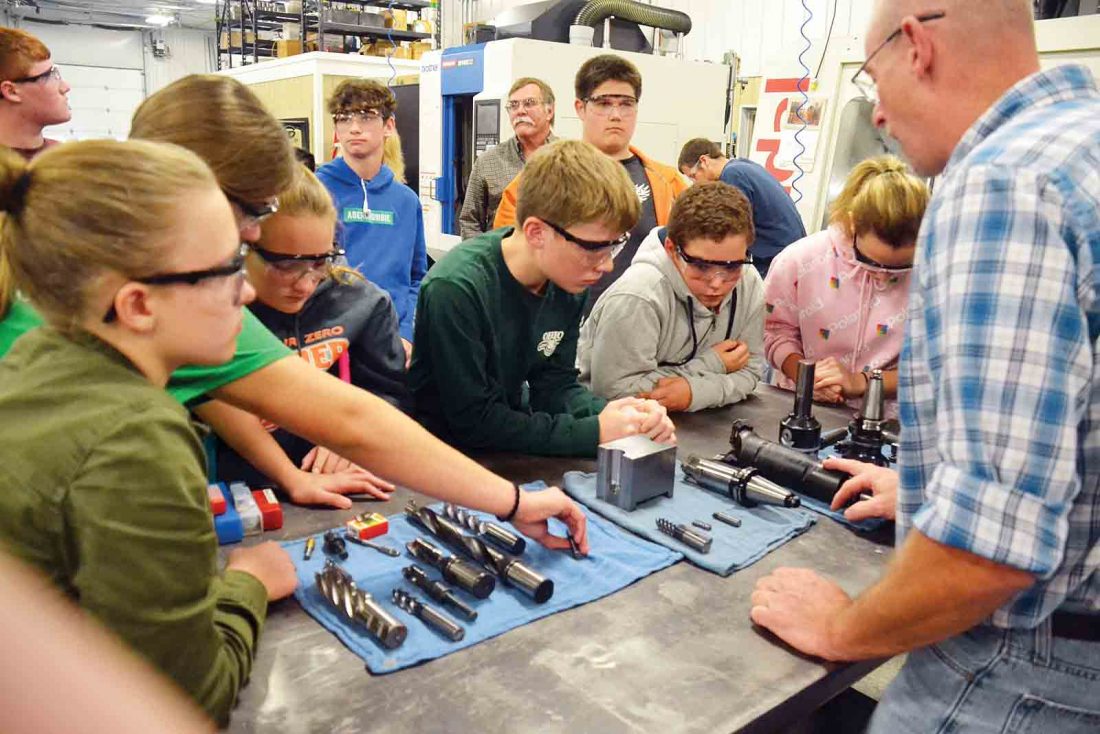 Students from Waterford Elementary School examine machine tool attachments during a field trip to Micro Machine Works in Barlow. The eighth-graders were given a tour of the plant, which specializes in making precision parts. (Photo by Michael Kelly)

BARLOW — The innocuous, red-roofed plant on Ohio 339 doesn’t have a sign, and company president Linn Yost said for the first few years it was in business, Micro Machine Works didn’t even have a dedicated phone number.

“It was all word-of-mouth,” Yost said.

About a dozen eighth-grade students from nearby Waterford Elementary School recently got a tour of the shop and saw some of its products and the cutting edge technology used to make them.

Shop manager Russell Kern held up a clear plastic tray the size of a paperback book, with a complex array of enclosed channels. He explained that it was an analysis container for blood testing done by a computer chip. Micro Machine Works made the metal mold used to manufacture the trays.

“It’s used to test for HIV, and now they are developing a system to test for Lyme disease. It’s a $10 test that’s done in 20 minutes,” he said. “A complete chem lab in a chip.” 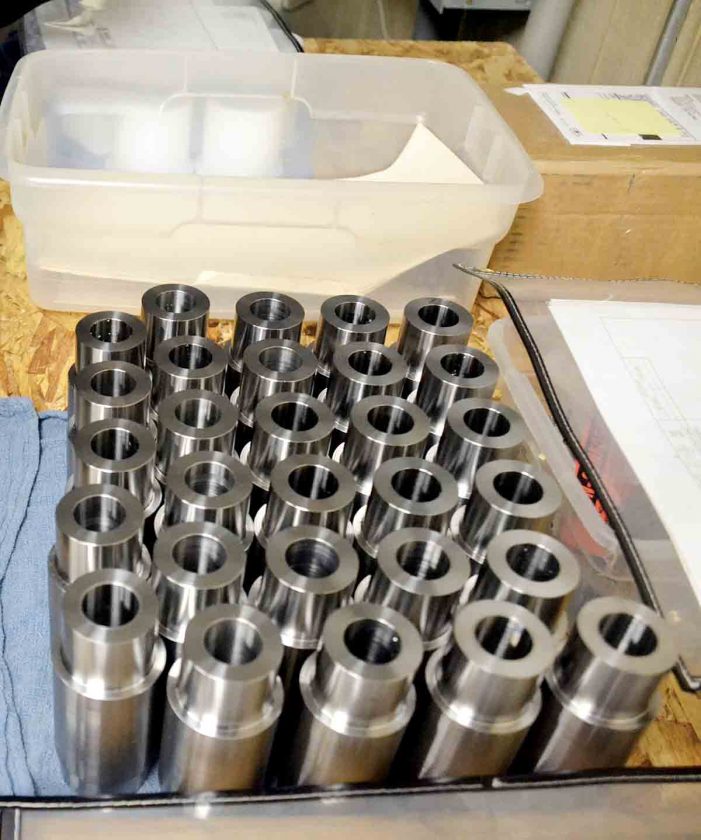 Precisely machined parts are arrayed on a table at Micro Machine Works in Barlow. The shop hosted a tour of Waterford Elementary School eight- grade students. (Photo by Michael Kelly)

Kern turned to the projector and showed the students a machine they had made for the medical laboratory industry to close sterile sample vials and attach coded labels to the caps of each of them.

“It does 768 of them in two minutes,” he said as the students watched the machine table move back and forth, sealing the vials and then printing the labels. “They had highly paid scientists doing this by hand, and in a day this all they would get done. That’s an engineer’s job, solving problems.”

“These are used to cool semiconductors,” he said. “As an example, they use them to keep the electronics cool on F-35 fighter airplanes.”

On the shop floor, the students toured workstations of enclosed lathes and drills, cutting, gouging and drilling metal and plastic in accordance with programmed instructions from a computer and operated by machinists. Trays of finished bushings, yokes and other shiny metal objects sat on tables, while billets of raw metal waited to be formed.

Yost said the primary limitation to his business expanding is trained staff. He has 15 at the plant, most of them machinist apprentices in a three-year program, people he “just hired off the street.” He could use more, and the shop is reaching out to schools through Building Bridges to Careers, apprenticeship programs, the Robert C. Byrd Institute and the Appalachian Ohio Manufacturers Coalition.

“We encourage students to come through here, we had Warren students yesterday,” he said. “We’d like to see kids get into employment when they get out of school.”

In an enclosed room with controlled temperatures, Kern showed the group a high-magnification camera used for checking quality in the shop’s products and some of its manufacturing.

“These guys who work here rely on the machines to work to tolerances smaller than the diameter of a human hair,” Kern said, explaining that a hair is 75 microns in diameter and the shop works to tolerances as small as five microns or less. “We have drill bits so tiny they can drill a hole in a human hair. That’s the way the world is going.”

Student Lee Haiss said it was an interesting experience.

“I was impressed with how precise everything is,” he said. “Some of the people in my family do this kind of work, and I guess it’s a possible career idea.”

“All that machinery was really neat looking. It’s not something I’d want for a career, but it’s still interesting,” she said.

Josie Burke said she’s considering a career as a veterinarian but still thought the trip through the shop was worthwhile for the insights.

“These different machines, what they can make,” she said. “It makes you think about how things are made, what goes into it.”

Yost said Micro Machine Works has a variety of customers, ranging from NASA to manufacturers.

“The one thing holding us back is getting enough of the right kind of people,” he said.

A Glance at Micro Machine Works