Cleveland firm to build similar operation in Belpre as well 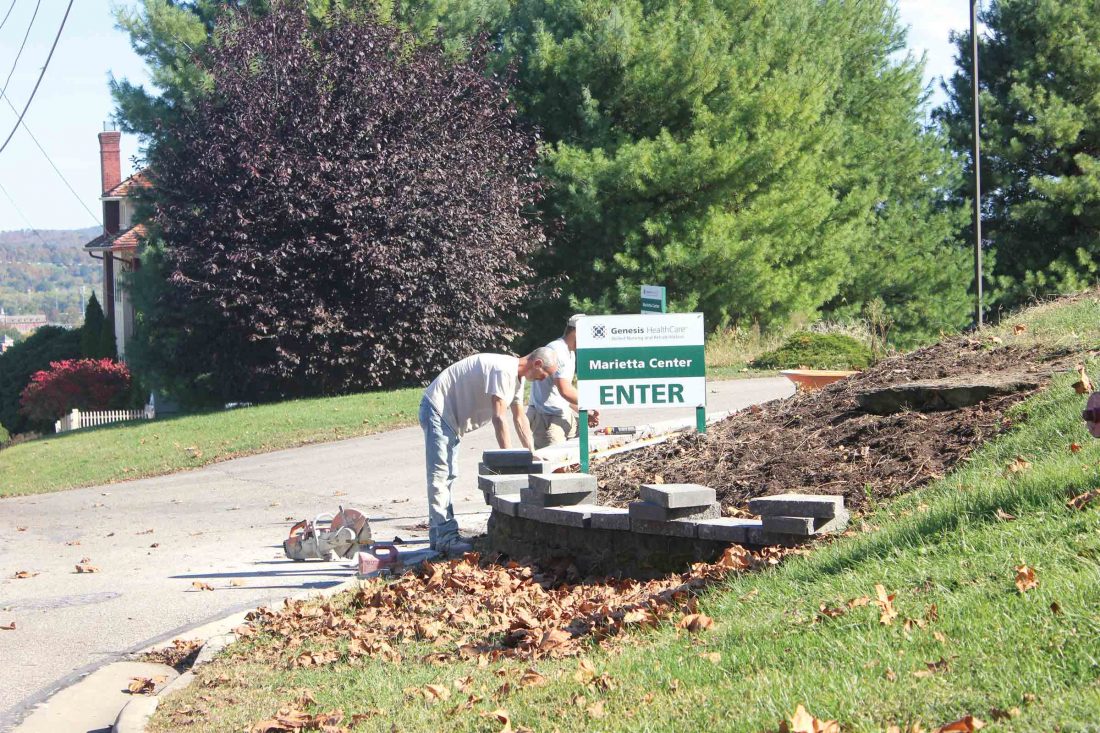 Crews work on landscaping outside the former Marietta Center nursing home. The property is being renovated by a new owner, Foundations Healthcare Solutions, which expects to reopen it as a 67-bed facility next spring. (Photo by Janelle Patterson)

MARIETTA — The property formerly operated as Marietta Center skilled nursing, rehabilitation and long-term care has been sold to a Cleveland-area firm for $1.1 million. It will be redeveloped for the same purpose and is expected to open in spring of next year.

Levi Lunford, director of operations for Foundations Healthcare Solutions, said the company also has purchased land in Belpre to build a similar operation there.

Marietta Center, 117 Bartlett St., had been in operation for more than 50 years before its owner, Genesis Healthcare of Pennsylvania, announced its closure in January.

The center had 150 beds and was one of the largest of its kind in Washington County. Genesis leased the property from Ventas Realty LLC, which had acquired it in 1998. The transaction recorded last week was between Ventas and Marietta Health Realty, which according to state records was established in late April as an affiliate of Foundations.

Headquartered in the Cleveland suburb of North Olmstead, Foundations owns 57 nursing homes in Ohio that include physical therapy and skilled nursing services. Its operations include seven facilities in southeastern Ohio – two in St. Clairsville and one each in Wheelersburg, Uhlrichsville, Barnesville, The Plains and West Lafayette. Its other facilities are in the Cleveland, Columbus, Cincinnati and Dayton areas.

Lunsford said Foundations is in the process of renovating Marietta Center into a 67-bed facility with all-private rooms.

“It will still be a nursing facility, with long-term and short-term services. We have taken that big property and invested a lot into remodeling and renovation, it will have all private rooms. It’s getting some of the love it needs right now,” he said Monday.

The facility will include provisions for Medicaid patients and residents, he said, who will also get private rooms.

“I get to tour families around our facilities, and it’s nice to see how people respond when they realize their parent or loved one on Medicaid gets a private room,” he said.

“The average perception of nursing homes is not necessarily positive, and it’s cool to be able to deliver this. It’s not the everyday perception that people have.”

It will be a welcome addition to Marietta area health care resources. The 106 patients and residents at the home when the closure was announced in January were relocated to other facilities over the following several weeks.

Jennifer Westfall, director of the Area Agency on Aging at Buckeye Hills Regional Council, said the need for care for the aged will become more acute in the coming years.

“Our staff worked with (Marietta Center) to transfer everybody, and it went as smoothly as that kind of experience can,” she said. “There’s always going to be a need as the population continues to get older. Numbers show that by 2030, over half the population in rural counties will be 60 or over.”

“One thing you run into when you have a managed care operation, or you’re any kind of provider, is that you have to be able to establish a big enough caseload for revenue,” she said. “And the workforce, it’s not glamorous or high-paying work, and a lot of times you need people with good hearts and a desire to serve.”

Lunsford said Foundations expects the new Marietta facility to employ about 85 full- and part-time staff, and intends to recruit locally.

“We try to pay the best wages so we don’t have to deal with staffing agencies, but what’s more important is our employee culture. We have a vice president who works with nursing assistants, talks to the teams about what they’re finding burdensome, and takes that back to the operations team,” he said. “We can directly change operations depending on the feedback we get from the floor. Corporate is seen as a support, and honestly, that helps us.”