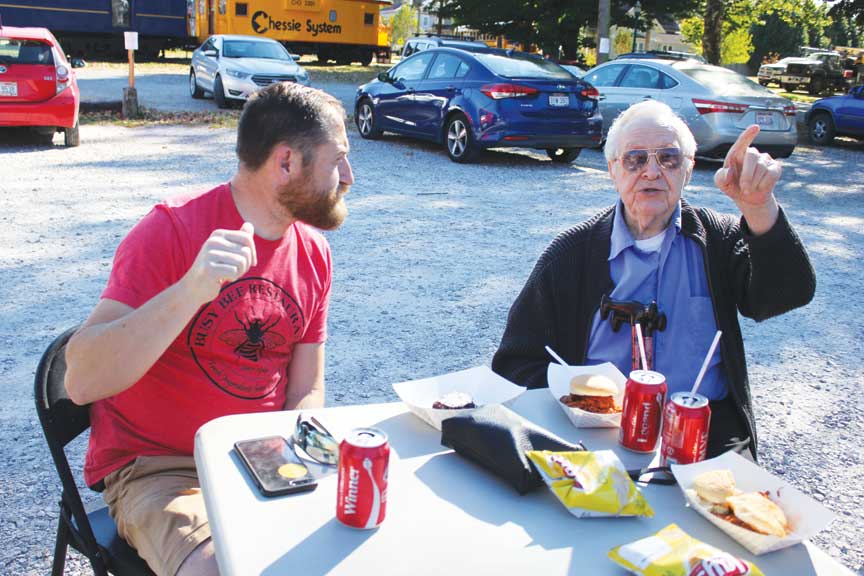 MARIETTA — During a 1940s flood, John Williamson, 87, climbed into a soda case and rowed through two feet of water from the back of the Busy Bee kitchen, into the front of the restaurant.

“We’d forgotten to unplug one of the cabinets up there,” he recalled. “So, I took a broom and rowed up into the front and had to hit the plug down.”

It’s one of so many tales that took place in the restaurant, a staple on the west side of Marietta for 75 years, serving breakfast and other comfort food.

Williamson’s parents, Donovan and Freda Williamson, founded the Busy Bee Restaurant first on Putnam Street in 1943, then moved the restaurant to the home it has occupied for 75 years on the west side in 1944.

Last Friday John, who has memories of living above the Gilman Avenue business and scooping ice cream each Sunday throughout his childhood, joined the current owner Larry Sloter in celebrating that 75th anniversary, cutting a blue ribbon and participating in the outdoor barbecue foreshadowing plans for next summer.

“We’re continuing to work on our kitchen remodel and next summer plan to add outdoor seating,” said Sloter. “Everything I’ve built up from here, expanding the dining room, adding a first-floor bathroom, that builds upon the owners that came before. And now it’s coming closer back to what the Williamsons had in the beginning with fresh and local ingredients and cooking from scratch.”

John Williamson said he’s impressed with the upgrades Sloter has made over the last three years.

“There’s no place like home, even when home is a restaurant, and the new way the waitresses can take your orders and the computer sends that back to the kitchen–that’s pretty slick,” he said as he watched school children join the party Friday. “I grew up part of my life here; my sister, when she got married, had an apartment here. My mother started the youth center in the building behind here.”

The Williamsons owned the Bee through 1954 before moving on to New Martinsville, then St. Marys, then opening Johnny’s Place on Seventh Street.

“My aunts would come here as teenagers, and they used to dance to the jukebox, bring their quarters,” said Larry’s wife, Kristin. “This was the west side hangout into the ’50s and ’60s.”

Meanwhile, the Bee changed hands a few times over the years.

“Then I bought it from Donna in 2016,” explained Larry Sloter. “Between high school (at Warren) and Marietta College, I had worked in restaurants, and I always loved food.”

But first, the forays into banking and finance, then higher education taught Sloter the business end of entrepreneurship.

“Then, one day, I came into the Bee and saw the for sale sign,” he explained.

“We had already been talking about this concept of locally-sourced and fresh, and we knew it could work. But to start with a client base and build off a brand that had been here for at that point 70 years was what made this successful.”

Now Sloter gets his strawberries from Stacy Family Farm, sausage and brisket from Hickory Hills processing, bacon out of Canton and fresh produce from the Worthington Farm in Lowell.

“Their youngest son, Ty, I coached in soccer, so I could literally trace my customers’ purchases to his football cleats,” smiled Sloter. “That’s what we mean by eat and support local. We buy their cabbage and turn it into coleslaw all summer and next summer the plan is to start making our own sauerkraut entirely in-house.”

Where the Busy Bee has been for 75 years, it was once also a bakery, and those pastry offerings are also in Sloter’s plans for the next year.

“We want to get where we’re selling cinnamon rolls every day, where we’re adding some more cappuccino offerings and continue to be that family breakfast spot,” said Sloter.

Vicki Ayers, of Oak Grove, said she holds a soft spot in her heart for the lifespan of the restaurant, recalling memories with her father in the building.

“Dad was here so much he was practically part of the furniture,” she told Sloter at the anniversary barbecue. “When I’d come back from college before he’d take me back to school, he’d make sure to take me to breakfast at the Bee.”

And for cartoonist JD Williamson, John and Diane’s son and Donovan and Freda’s grandson, getting to see his father cut the ribbon with Sloter was emotional.

“I was really pleased that mom and dad were able to come and see this,” he said after drawing a caricature of Maple Cunix, 4, of Marietta. “There have been a lot of happy memories here over the years. Every time we come back, dad has a new one to share.” 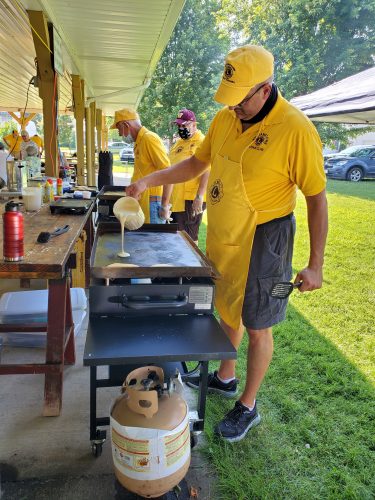