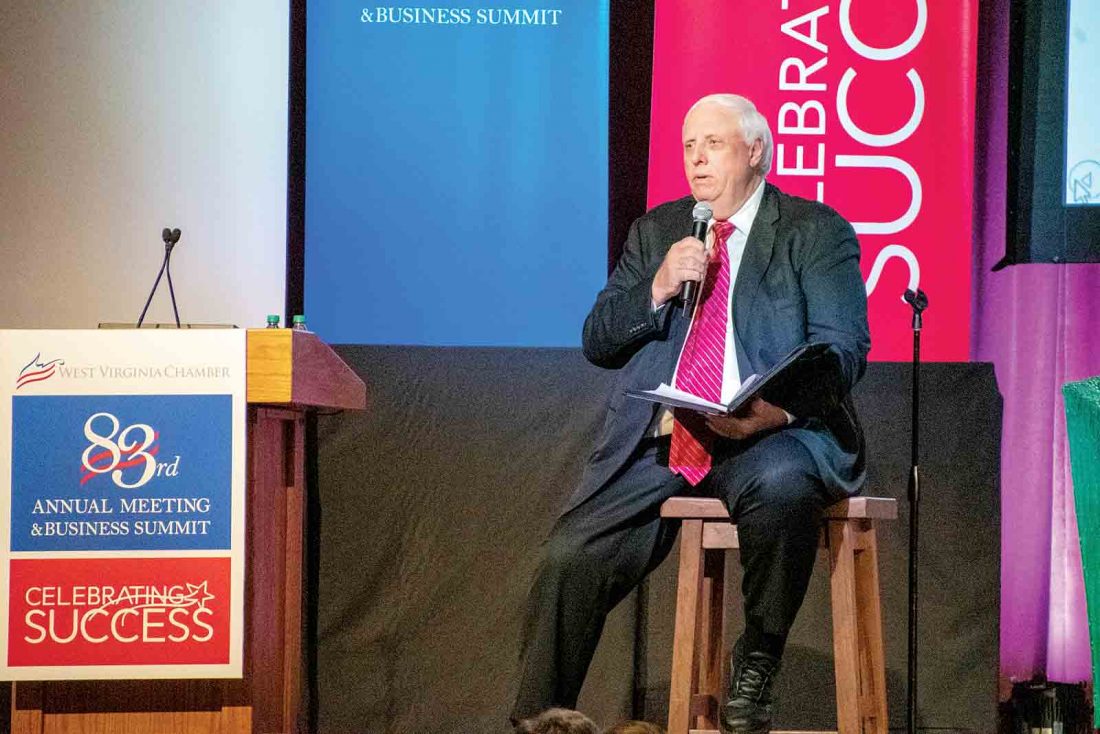 Gov. Jim Justice announces the creation of the Downstream Jobs Task Force at the West Virginia Chamber of Commerce’s Annual Meeting at the Greenbrier Resort. (Photo courtesy of the Governor’s Office)

WHITE SULPHUR SPRINGS — Wanting to focus the state on natural gas production and petrochemical manufacturing, Gov. Jim Justice announced the creation of a new task force to state business leaders on the first day of the West Virginia Chamber of Commerce’s 2019 Annual Meeting.

Justice and state environmental and tax officials announced the creation of the Downstream Jobs Task Force at the start of the chamber’s annual meeting Wednesday at Justice’s Greenbrier Resort in White Sulphur Springs.

The governor signed a proclamation Wednesday creating the task force. The mission of the task force includes facilitating the development of downstream manufacturing resulting from the production of natural gas, such as chemical and plastics manufacturing.

“This task force will work to bring downstream manufacturing opportunities to West Virginia ahead of this coming expansion of the petrochemical industry,” Justice told attendees Wednesday morning.

Speaking Wednesday afternoon, Caperton said between 1967 and 2018, natural gas production increased by 600 percent, with most of the production coming within the last decade.

“That explosion in production has been a tremendous economic driver for the State of West Virginia,” Caperton said. “Anybody who lives in the northern part of the state knows what’s happened up there. It’s absolutely amazing…but it’s only the beginning.”

According to Caperton, in the last decade West Virginia went from 4.9 trillion cubic feet of natural gas reserves to 35.9 trillion. While Royal Dutch Shell is building a cracker plant — which breaks down ethane into ethylene for use in chemical and plastics manufacturing — in Monaca, Pa., Caperton said the region could support as much as five cracker plants.

“Ethylene is going to fuel and feed extensive downstream manufacturing facilities, not to mention pipelines, storage hubs, all driving unbelievable economic app activity,” Caperton said. “We must capture our share.”

Justice said he has been in talks with President Donald Trump and the White House about West Virginia’s energy potential. Justice also told attendees about an upcoming proclamation from Trump regarding natural gas and the petrochemical industry in Appalachia.

“If you don’t believe that is a reality that is coming our way and absolutely has potential beyond belief, you’re thinking wrong,” Justice said. “This is absolutely coming from the Oval Office not in a memo, but this is coming from discussions with me.”

Hardy said the possible benefits of a petrochemical renaissance in West Virginia could include $36 billion in capital investment, 100,000 in new jobs, $28 billion in economic expansion, $2.2 billion in yearly tax income. Hardy’s job will include trying to look at the state’s tax structure to help lure these businesses to West Virginia.

“The governor told me he wanted me personally as a member of the task force to try to understand in-depth what all the other states and our competitors are doing,” Hardy said. “Why wouldn’t there be competition for…a cracker that costs $10 billion to build, that would generate 5,000 construction jobs and that’s a conservative estimate. There’s going to be competition, but West Virginia — with our governor leading the way — wants us to step forward and compete.”

One way officials plan to be more competitive is by taking another whack at eliminating the business and inventory tax. An attempt to remove the tax requirement from the state constitution, House Joint Resolution 17, made it out of the House Finance Committee Jan. 24, but was never taken up by the House Judiciary Committee and died. Justice said the tax has got to go.

“I think we need rid of the business and inventory tax before this wave hits,” Justice said. “When this wave hits, West Virginia will really go. Today we’ve crawled out of a dismal hole and today we’re on the launchpad to take off.”

Steven Allen Adams can be reached at sadam@newsandsentinel.com