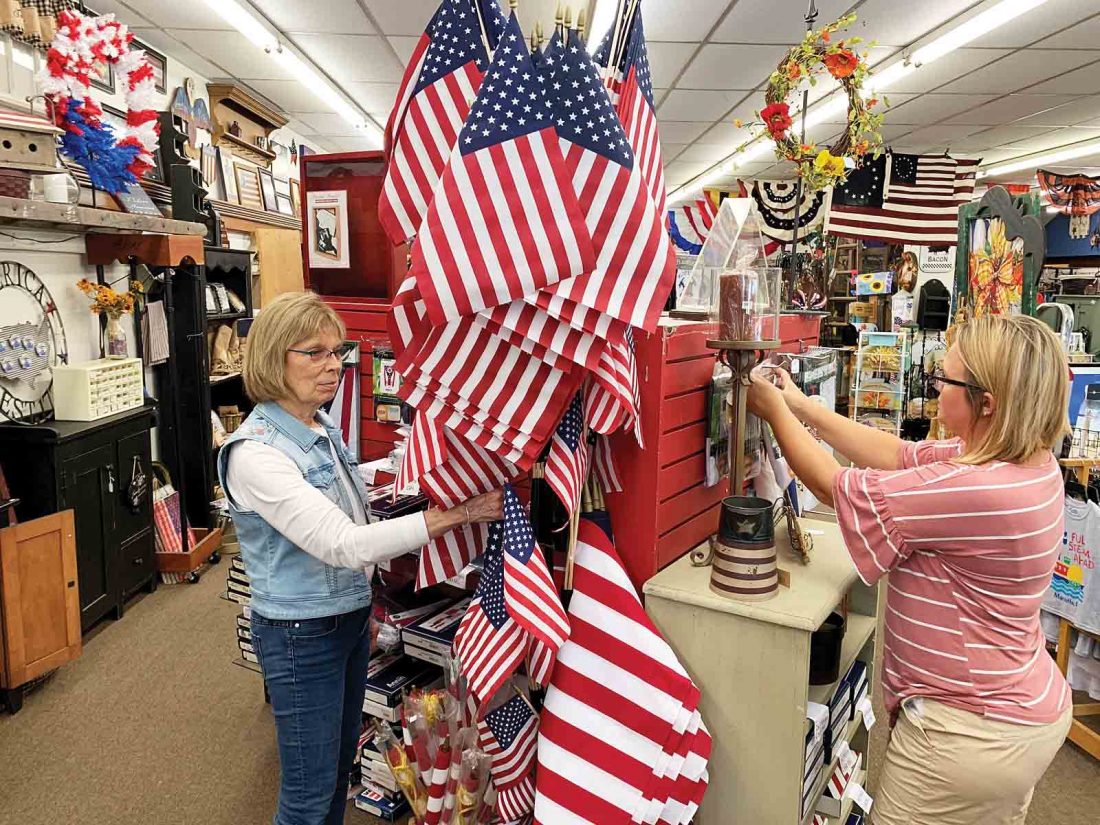 MARIETTA — In preparation for its 24th anniversary, one Front Street staple has rearranged its store to better display the niche market it serves.

“Give it a week, and you won’t recognize it again,” joked Jim Caporale, co-owner of American Flags and Poles, as he unboxed inventory Friday.

“People could walk by and only see us as an antique store before, but I really don’t sell antiques. Yes, I sell some primitive decor, but our true base and service is in our American flags and our lawn flags,” said Sylvi Caporale.

So the 4,000-square-foot store has shifted all of its Americana offerings, from traditional U.S. flags to signage and decals representing individual branches of military and first responders, to cover one-third of the store rather than rest in the back, and has lawn decor and flags more focused on the opposite side of the now-central service desk.

“American flags is in the name, and now you can really see them, really see the poles we have and their finishes,” added Missy Arnold, who has worked in the store for years with the Caporales. “It’s our specialty, and our flags are what our loyal customers know us for–for being year-round patriotic, for appreciating every part of our community from fire, police and paramedics to supporting our troops.”

And the business is hosting an open house to celebrate its anniversary to coincide with Marietta Main Street’s First Fridays in September to remind the public of the business’s partnerships, too.

“We loan products for veterans’ and memorial celebrations, for special events, I just returned from a high school two hours away that wouldn’t have been able to afford the size flag they needed for their ceremony,” explained Sylvi. “And we’re glad to share that patriotism with our community, we’re glad to be a distribution point for things like the school levy signs.”

And now, Sylvi smiled, she’s hoping for more of her favorite customer question.

The open house to celebrate the business anniversary will run from 6 to 9 p.m. on Sept. 6, with patrons asked to R.S.V.P. via Facebook.

* American Flags and Poles will celebrate its 24th anniversary of operations on Sept. 1.

* An open house will be held in the store on Sept. 6 during First Fridays in downtown Marietta.