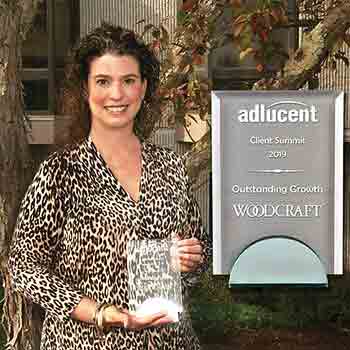 PARKERSBURG — Woodcraft recently received an Outstanding Growth Award that reflects the success of its partnership with Adlucent, a digital marketing performance agency headquartered in Austin, Texas.

The award was presented to September Fleming, Woodcraft Director of Digital Marketing, during the 2019 Adlucent Client Summit April 3-5 in Austin. Fleming and Kim Wallace, Marketplace Channels Administrator, represented Woodcraft at the summit.

“The Outstanding Growth Award is based on an increase in AdWords revenue Woodcraft has experienced so far in 2019, as well as an increase in new users and store traffic from our advertising efforts with Adlucent,” Fleming said. “Adlucent brought Woodcraft new advertising opportunities to gain and attract new online and in-store customers. We tested them, and they ended up being very profitable.”

Adlucent is a digital retail agency.

“Woodcraft has a great partnership with Adlucent and is thrilled to accept the Outstanding Growth Award,” President/Chief Executive Officer Jack Bigger said.

About five years ago, Fleming said, Woodcraft began working with Adlucent on the Google AdWords program that Woodcraft has been a part of for many years. AdWords is a pay-per-click (PPC) advertising platform in which the advertiser pays only when a viewer clicks on the advertiser’s ad.

A few years later, Adlucent became more involved with Woodcraft’s digital advertising efforts when Woodcraft, based in Parkersburg, began looking to attract new customers for both online and retail businesses through advertising on the social platforms, Fleming said.

“We started with Facebook/Instagram in October 2017, and then in June of 2018 we branched out into advertising on YouTube, Pinterest and Amazon Marketplace,” Fleming said. “Adlucent has placed social advertising on Facebook, Instagram, YouTube and Pinterest in the form of ads, images, videos, and carousels and pins for products and store locations.”