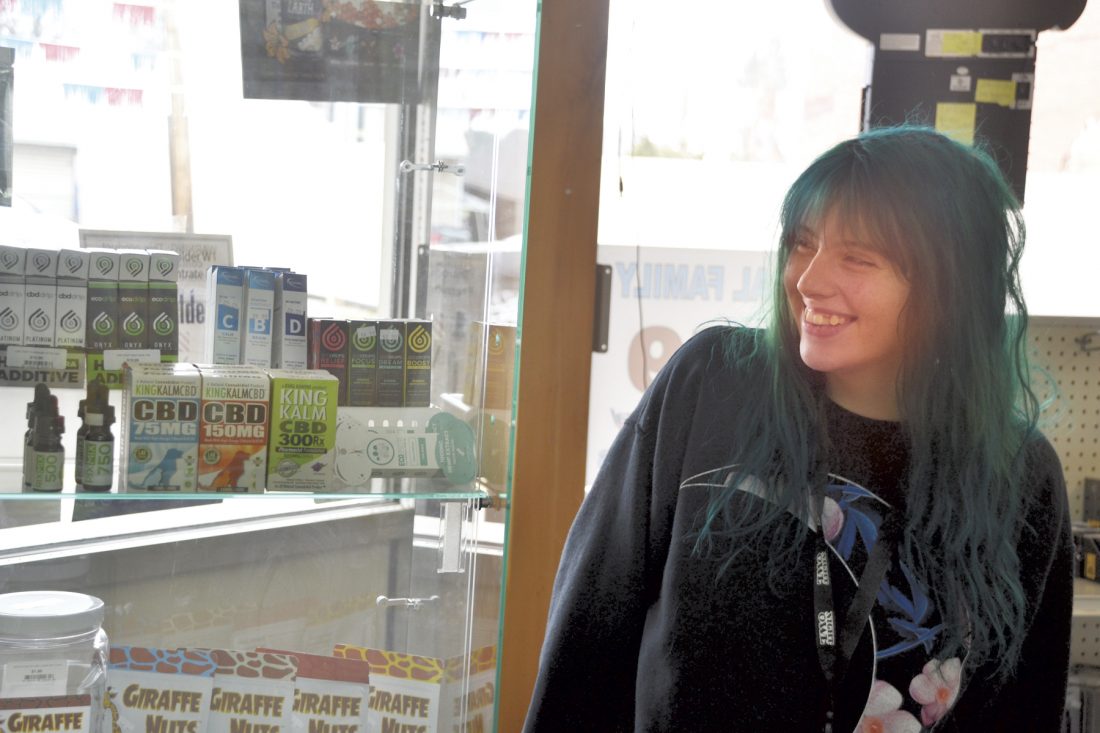 Photo by Michael Kelly Mae Williams, a clerk at Smoker Friendly in Williamstown, stands by a glass cabinet bearing a shelf of CBD products. Because of wording in Ohio’s medical marijuana law, CBD products became illegal in the state last year but are legal across the river in West Virginia.

MARIETTA — The state law enacted in 2018 to legalize medical use of marijuana had the apparently unintended side effect of prohibiting the general sale of CBD oil, a product derived from hemp thought by many to have therapeutic benefits.

Many stores in Ohio cleared the products off their shelves, while others continued to quietly sell it if customers requested it.

The situation was another collision of multi-jurisdictional laws, not unlike the medical marijuana act, which made a substance listed by the federal government as a Schedule I narcotic legal to dispense in Ohio. Cannabidiol products are legal under federal law but for the time being prohibited in Ohio, while at the same being legal and on the shelves of stores in West Virginia.

Hemp suffers from guilt-by-association with its hipster cousin, marijuana. Both are members of the cannabis sativa plant species, but hemp contains only a tiny amount of tetrahydrocannabinol, the chemical that gives marijuana its buzz. In interpreting the Ohio medical marijuana law, the Ohio Board of Pharmacy determined that hemp products fell under the same restrictions as medical pot, meaning it could be sold only under a physician recommendation by a state-licensed dispensary.

Mary Jane Borden with the Ohio Rights Group, a hemp and marijuana advocacy organization established in 2010, said sorting out the legal status of hemp and harmonizing state law with the federal Farm Bill would have a significant effect not just on CBD oil production but on the entire range of hemp-based products.

“Ohio could be the quintessential hemp-farming state,” she said. “It could be a huge contributor to the economy, but when they passed (Ohio bill) 523, they lumped all cannabis under a big umbrella. Now the intent of the Farm Bill is in conflict with the state, but I think the Farm Bill will win out.”

Borden said CBD oil was removed from sale by some vendors, but others, like some in Columbus and Cincinnati, continued to sell it openly.

“I see a constant flow of inquiry,” she said. “It’s growing in recognition and acceptance. What I’ve found is an expansion of use in my patients and the community.”

CBD products, she said, are safe and effective anti-inflammatory treatments and have the potential for treating other conditions ranging from anxiety and depression to chronic pain, autoimmune disorders and gastrointestinal problems.

“It heals the body by reducing the inflammation that is the basis of most conditions,” McCarter said. “As a physician I am able to work with CBD by varying the dosage and monitoring conditions, to see what types and doses are working best with different patients.”

She also noted that the quality of CBD products can vary widely. The oils, tinctures, ointments and other compounds are widely available on the internet and from stores ranging from pharmacies to gas stations.

“We offer a safe place to purchase it and monitor its use. We already review the quality of the supplement — I travel to conferences, review manufacturing practices and growing conditions, reading third-party testing reports,” she said. “More people are coming here, not necessarily because of what’s happening in Ohio but because they find I’m a trusted physician and they don’t have to do the homework about these products.”

It is a high-growth industry, according to the analytical website Statista, which showed revenue from 2014 to be $108.1 million and forecast growth by 2022 to be $1.812 billion.

State Sen. Steve Huffman intends to sort out the status of CBD in Ohio while planting the seeds of a thriving hemp industry in the state.

Huffman, who is a medical doctor, is sponsor of a modified version of Bill 523, which is now in committee and could become law in a few months.

The law would remove CBD oil from the oversight of the pharmacy board and place it as a commodity under the state department of agriculture, he said.

In addition, the bill would lift restrictions now in place on hemp farming.

“With industrial hemp, you can make rope, paper, clothing, even car parts,” he said. “This idea has been very well received by the agriculture community. I’ve seen estimates that hemp can bring in $60,000 an acre.

“My personal thought is, say you have a guy with a 500-acre farm — he wouldn’t plant it all in hemp, just 50 acres for a couple of years, see how it does,” he said. “I’m hoping that by the summer break we’ll have passed the bill, give the department of agriculture six months to write the rules, and people can prepare and put seed in the ground in 2020.”

It would also provide certainty to retailers and consumers about CBD products.

“The retailers have been in great confusion,” he said.

“I think the major crimes task force just discusses it with people,” he said. “There were one or two stores that had some of it, but we’re not taking any enforcement action, we’re just giving people warnings.”

Just across the Williamstown Bridge from Marietta, the Smoker Friendly shop in Williamstown continues to display an array of CBD products in a glass case near the front entrance. The store sells tobacco and vaping products and paraphernalia, and beer and snacks.

Assistant store manager Theresa Sandy said on Friday that demand is going up for CBD products.

“We get a lot of business from Ohio anyway, but word seems to be getting around about CBD,” she said.

* Rewords legislation with the intent to remove jurisdiction of hemp products such as CBD oil from the state board of pharmacy and place it as a commodity with the department of agriculture.

* Would have the effect of making CBD oil legal to sell and possess.

* Would harmonize state law with provisions in the Farm Bill of 2018.