Camden Park as depicted in “Fallout 76.”

The Greenbrier as depicted in “Fallout 76.”

Charleston as depicted in “Fallout 76.” 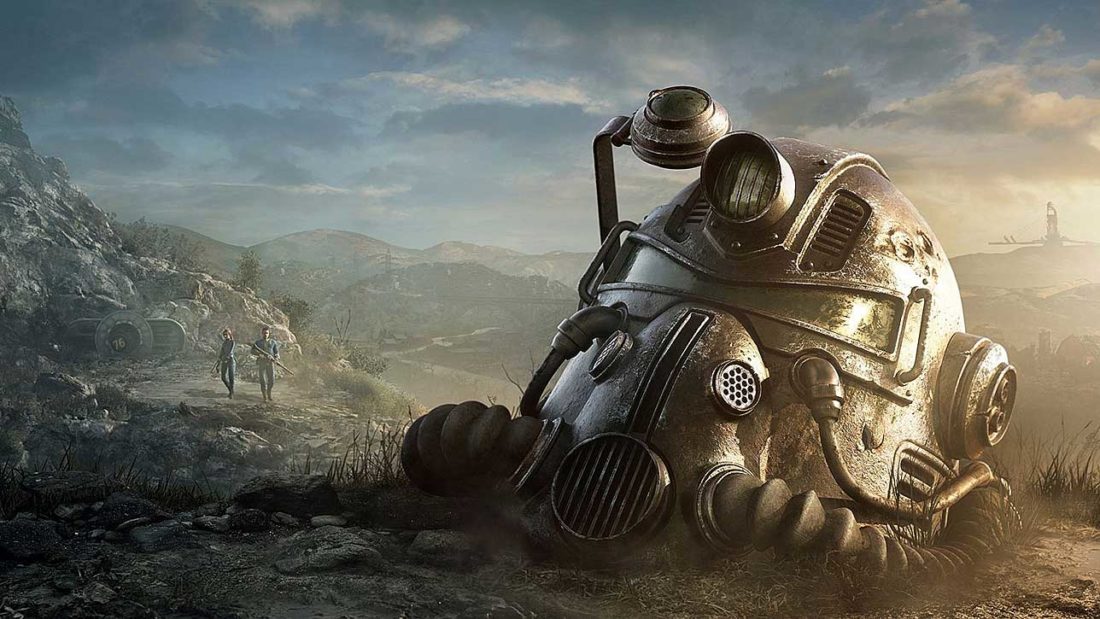 CHARLESTON –­ Sometime in the future, a bunker opens to the northeast of Parkersburg.

The survivors of a nuclear war make their way out of the fluorescent into the natural sunlight. It’s up to them to try to rebuild a scorched Earth, starting in the mountains and valleys of West Virginia.

It’s the plot of a new video game being released in the next 80 days, and while at first glance it doesn’t seem like a positive thing — a post-apocalyptic West Virginia — many see the game as a mechanism to introduce a new audience to the Mountain State and hopefully encourage them to visit in the real world.

“Fallout 76,” the ninth game in the series, is an online multiplayer game coming out Nov. 13. It was first announced May 30 and showcased at the E3 video game conference June 10 in Los Angeles. 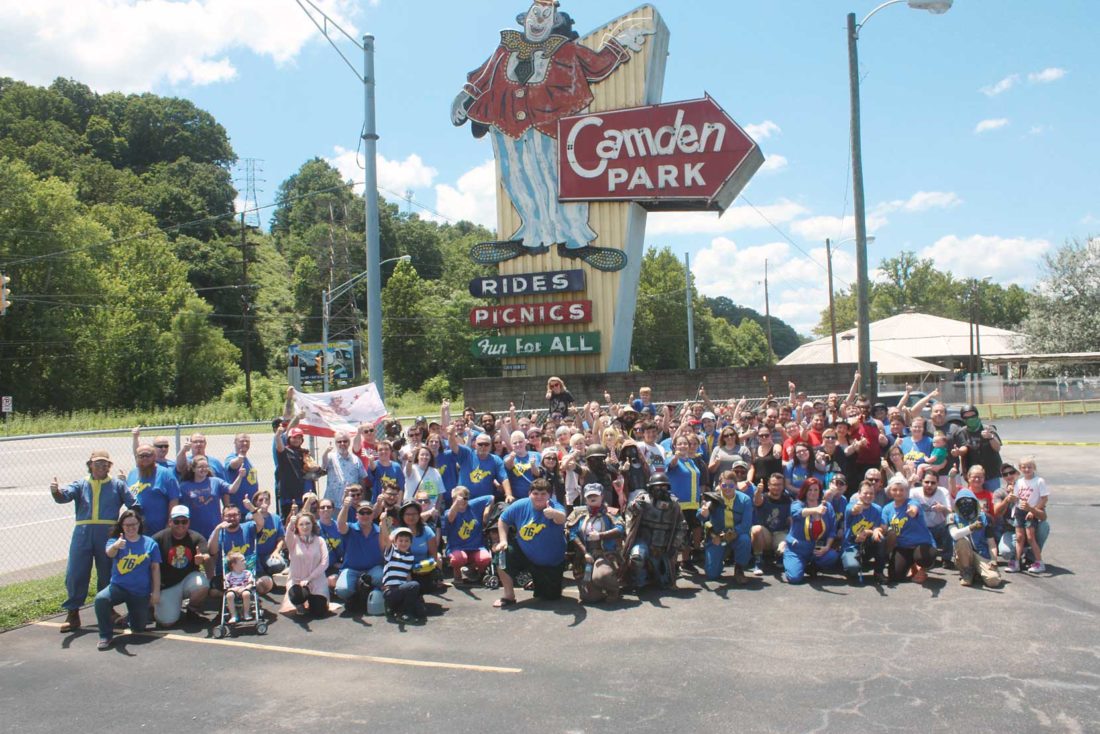 The Fallout series takes place far into the future after a nuclear war destroys the planet. Each game focuses on a particular part of the United States and each player has to overcome mutants, violent tribes, ghouls and the former malevolent remains of the U.S. government called the Enclave to start rebuilding a better world.

Until “Fallout 76,” all the games were single-player games designed for PC and later for consoles such as the Playstation and Xbox, but “Fallout 76” will be entirely online. Instead of playing alone, the player can team up with other players and explore — and survive — together.

The games are known in recent years for their large game maps focused on real places, such as Washington, D.C., Las Vegas, and most recently Boston, Mass. This time, the game designers decided to make a game map four times larger than the Boston map. Bethesda, with an office in Washington, D.C., looked west and realized the best game map was right next to them: West Virginia.

Bethesda Game Studio’s newest game will focus on the survivors inside Vault 76, one of several bunkers constructed by Vault-Tech. Located near the Mid-Ohio Valley, it’s the year 2102 and the Vault 76 dwellers have been underground for 25 years. On Reclamation Day, the dwellers make their way to the surface and discover a brand new West Virginia.

From there, the player can largely do what they want and travel where they want on the smooshed together map of West Virginia. While not completely geographically accurate — Point Pleasant is north of Parkersburg in this imaginary world — players can visit many of the state’s cities and landmarks. 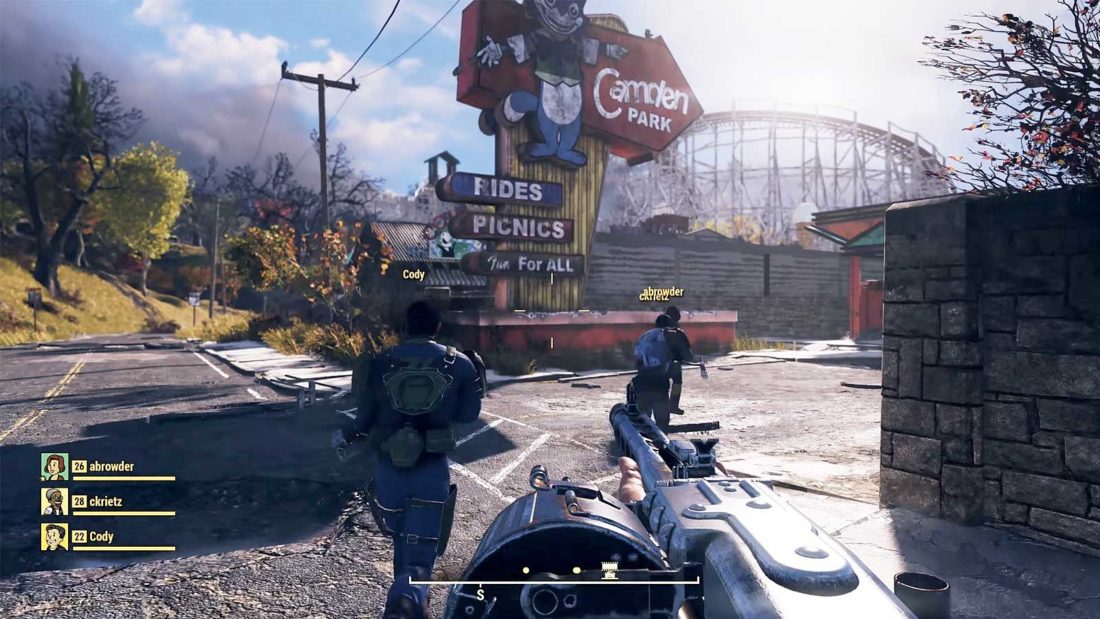 Camden Park as depicted in “Fallout 76.”

Travel to Charleston to see the remains of the State Capitol Building or downtown. Walk the New River Gorge Bridge that, despite a few large gaps, is still standing. Visit Morgantown and the campus of West Virginia University, renamed but still recognizable thanks to Woodburn Hall.

There are the remains of a ski resort near what was Elkins. The Moundsville Penitentiary still stands. Harpers Ferry, located near bombed out D.C., still exists. You can even fight monsters, such as the Mothman and the Flatwoods Monster. You’re free to see and experience it all in the game.

FROM FANTASY TO REALITY

It’s the focus of “Fallout 76” on West Virginia that has gotten in-state gamers excited, not just for the game’s arrival in November, but the interest it’s fostering in a state that is often confused for Virginia, stereotyped as backward, and written off as Trump country. 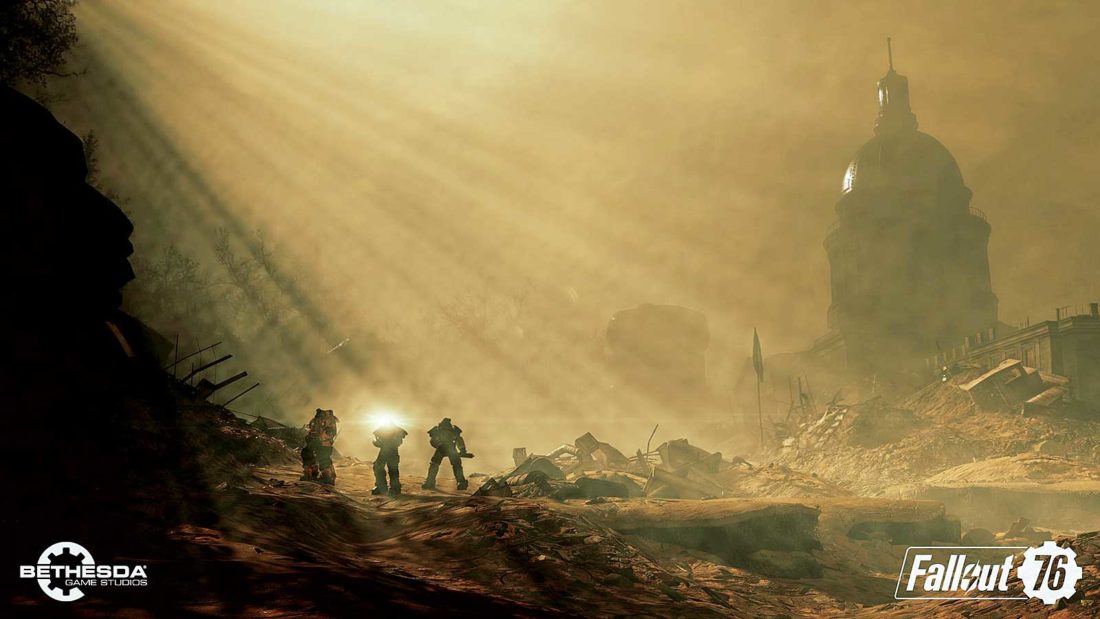 Charleston as depicted in “Fallout 76.”

David Chaffins and Austin O’Connor are friends from Bluefield. Chaffins graduated from Virginia Tech with a major in geography and a minor in Appalachian studies. O’Connor is a graduate of Marshall University and works for the state Division of Tourism as a content specialist.

The two live in Charleston and a few months ago started “Vault Boys WV,” a weekly podcast dedicated to talking about the game, the Fallout universe and how it relates to West Virginia’s real-life history.

“I thought that we would have an interesting take with our backgrounds, my studies of history and current events, and Austin’s background on the content side and modern West Virginia life,” Chaffins said.

Chaffins and O’Connor see “Fallout 76” has an opportunity to promote West Virginia in a positive light. They also see it arousing curiosity in people who have never been to West Virginia, let alone given West Virginia any thought.

“When it’s something tangible, I think it provides a very unique opportunity and (West Virginia) is unlike a lot of places, like New York, L.A., or D.C. These places have been covered in detail in other games,” O’Connor said “West Virginia is an uncommon tourist destination. This is a place a lot of people don’t know. I think people will see and go ‘this is a lot like Colorado. This is a lot like Oregon, and this is on the East Coast.'” 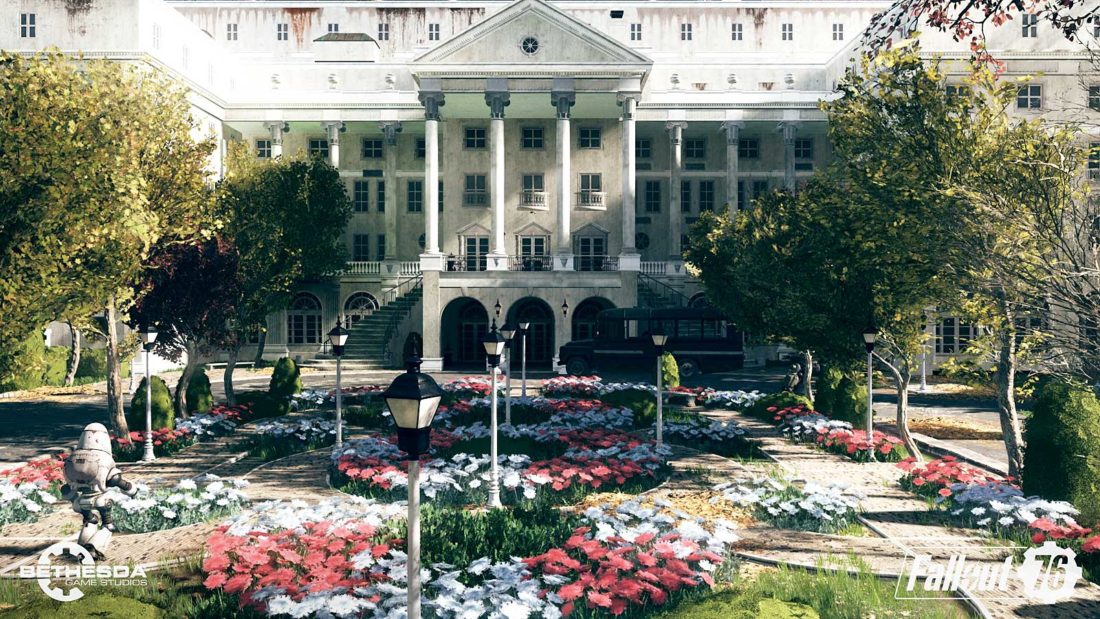 The Greenbrier as depicted in “Fallout 76.”

“There are all these locations that people are going to start realizing these are real spots and it’s fairly accurate in how it’s being depicted,” Chaffins said. “They’ll start trying to flock to the state.”

“Already, even before the game has launched, we’ve seen a really positive impact from it,” Chaffins said. “I think it’s going to make people wonder more about West Virginia and what it’s really like.”

Last month, Chris Barker of Catlettsburg, Ky., set out to get some of his friends to join him at Camden Park, an amusement park outside Huntington. Camden Park is one of the real-life locations one can visit in the bombed-out future of “Fallout 76.”

Instead, Barker’s event drew more than 400 people, with nearly 1,500 expressing interest on his Facebook event.

“It had spread by word of mouth just from the 10 people or so that I talked to about it,” Barker said. “I made the Facebook event, and the next morning there were over 300 people interested.”

Once interest started growing, Barker worked with Camden Park to explain the importance of the game and prepare them for the number of people who were coming. The event went down July 8 and brought in people near and far, from Greenbrier County to Tennessee.

For Barker — a bass player for The Dividends and a frequent performer in West Virginia — being physically at places he’ll soon be able to visit in the game is “exciting.”

“It was eerie going to Camden Park and just being there and a place that’s in the game, there is just something about that that’s exciting to me,” Barker said. “I’m in a band that’s played at Haddad Riverfront Park in Charleston. That’s in the game and I can stand on that stage.

Players of video games can sometimes be stereotyped, but gaming is more popular than ever and covers a larger demographic. Far from young people still in their pajamas in their parents’ basements, gamers are skewing older and are often college educated. They also have disposable income.

According to the Pew Research Center, while young men still make up the biggest demographic, four out of 10 women play video games, and 25 percent of people age 65 or older say they pick up a controller from time to time. Of people age 30-49, 53 percent say they enjoy playing video games, and 36 percent of people holding bachelor’s degrees also play.

The Division of Tourism is paying attention and working on ways to market West Virginia to these people. Under Tourism Commissioner Chelsea Ruby, the state is already seeing a 16.1 percent jump in hotel occupancy between June 2017 and June 2018, resulting in a 20 percent revenue increase since last year.

Ruby sees “Fallout 76” as another way to showcase the state and attract new visitors. The Division of Tourism is using analytics to see what people are searching for online.

“Even at just looking at website traffic and looking for terms which people are searching, we can see that there is an increase in interest in the state and the sites that are featured in the game since the announcement of the game,” Ruby said. “The great thing about advertising in 2018 is we can get very micro-targeted on who we’re advertising to. This game provides us a great opportunity to advertise West Virginia, and specifically to advertise the sites that are mentioned in the game to folks who are playing the game over the coming months.”

The Division of Tourism is in contact with Bethesda, the makers of “Fallout 76,” and is working on ways to work together to cross-promote.

“We know this a very popular game, and we’re working on finding creative ways to capitalize on the popularity of that game,” Ruby said. “Ultimately, what we want to do is bring as many fans of ‘Fallout 76’ as we can to visit West Virginia.”

TRUTH IS STRANGER THAN FICTION

“Fallout 76” focuses on a fictional post-nuclear war West Virginia, but in the real world, West Virginia was an integral part of the U.S. government’s continuity of government plan.

Most know about the declassified congressional bunker at the Greenbrier Resort. Finished in 1961 the bunker was built under the cover of an expansion. The bunker was hidden under the West Virginia Wing and built 720 feet into the hillside.

Built to provide shelter to members of Congress, the bunker couldn’t withstand a direct nuclear hit, but it could handle nearby strikes. It could also be pressurized and sealed off by several blast doors. The largest, weighing 28 tons, could be shut by one person if necessary. The bunker had everything needed to keep the House of Representatives and U.S. Senate functioning during a crisis. An adjacent facility could hold 1,400 family members. It was shut down after a 1992 report from The Washington Post.

The Greenbrier bunker isn’t the only continuity of government site in West Virginia though. According to “Raven Rock: The Story of the U.S. Government’s Secret Plan to Save Itself – While the Rest of Us Die,” journalist Garrett Graff details the government’s plans from the start of the Cold War to the present.

The FBI used Shepherd University in Shepherdstown as a relocation site during the 1950s. Storer College, the former historical black college, had a bomb shelter built beneath it by the Department of the Interior. Even Parkersburg served as one of several fallback positions for the Department of the Treasury at the department’s Bureau of Public Debt, now known as the Bureau of the Fiscal Service.

Perhaps there is more truth in “Fallout 76” than people realize.