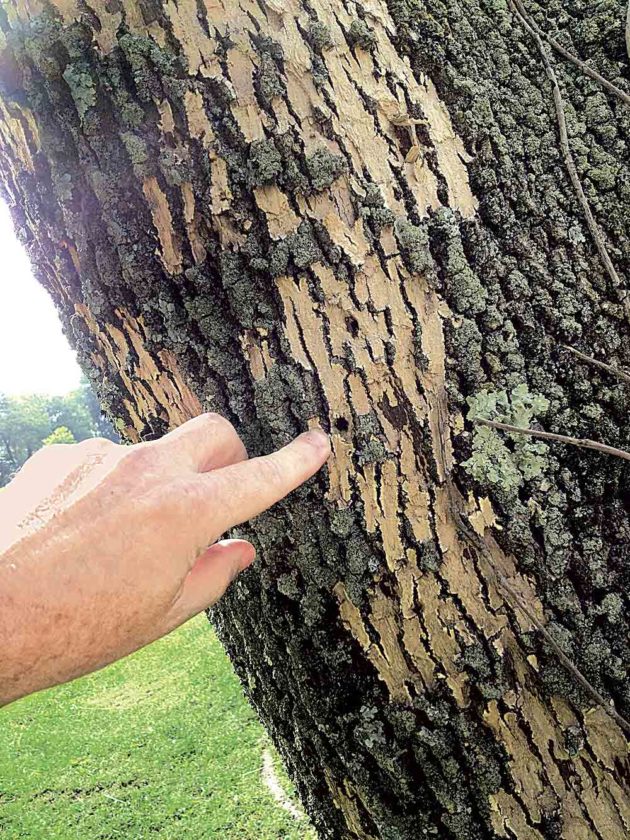 Photo Provided A technician points to the hole created by the emerald ash borer, which is destroying thousands of ash trees around the country. Mon Power has been removing affected trees to prevent outages caused when they fall.

PARKERSBURG –Thousands of ash trees damaged by the emerald ash borer located near power lines and other equipment are being removed by Monongahela Power to help prevent electric service interruptions and enhance system reliability for customers.

Tree crews have taken down nearly 16,000 dead and dying ash trees at a cost of nearly $2 million in the Mon Power service area, which includes Wood and surrounding counties, so far this year.

“Ash trees pose a growing risk to our electric system as they quickly succumb to the emerald ash borer and have the potential to fall and damage our power lines, utility poles and other equipment,” said Holly Kauffman, president of FirstEnergy’s West Virginia Operations. “We are addressing this problem proactively and aggressively by removing the damaged ash trees before they disrupt electric service to our customers.”

While ash borers are killing trees throughout the state, the Clarksburg, Fairlea, Gassaway, Parkersburg, Sutton, Weirton and White Hall regions have been particularly hard hit. First confirmed in the U.S. in Michigan in 2002, the invasive emerald ash borer originated in Asia and has decimated millions of trees in more than 20 states.

In 2014, Mon Power launched its enhanced tree trimming program that focuses on controlling vegetation near distribution lines in rural areas and along transmission lines to enhance service reliability. Power line rights of way are trimmed ground to sky, which helps eliminate the risk of overhanging limbs falling onto wires and causing outages. Cleared rights of way provide easier access for line workers to make repairs and restore power, shortening the duration of outages when they do occur.

Mon Power is or will be conducting tree trimming and ash tree removal in the following area counties and communities before the end of the year:

As part of its notification process, Mon Power works with municipalities to inform them of tree trimming schedules. In addition, customers living in areas along company rights of way also are notified prior to vegetation management work being done.