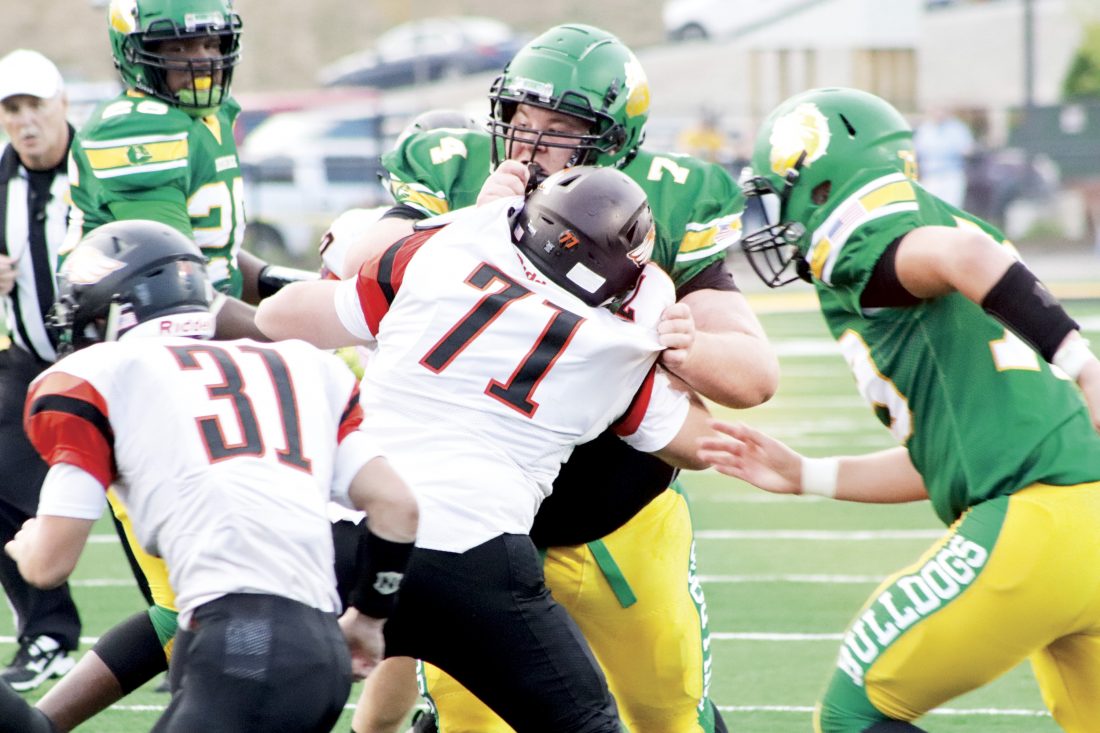 Photo by Joe Albright Doddridge County offensive lineman Cole James handles South Harrison defensive lineman Gaven Velazquez during the Bulldogs’ season-opening win over the Hawks. James and company earned the No. 1 seed in the Class A playoffs and will face No. 16 Madonna at 1:30 p.m. Saturday afternoon at Cline Stansberry Stadium.

The race to Wheeling Island Stadium kicked off with the announcement of game times and locations for the playoffs Sunday morning at the West Virginia Secondary School Activities Commission office.

Both the Bulldogs and Polar Bears are the defending state champion, while the DC Bulldogs advanced to the semifinals last season.

And despite their top status, Burnside is keeping the boys focused on the Blue Dons.

“What I think is that we are going to get ready to play Madonna,” said Burnside, when asked to comment on the playoff bracket. “Their only losses have been to teams out of Ohio and it is a program that has turned it around. Having the No. 1 seed and having homefield throughout the playoffs is awesome, but we don’t have time to celebrate. We have got to prepare and work hard, that is what got us here.”

Joining the green and gold clad group from West Union in the playoff field are three other Little Kanawha Conference teams.

Williamstown, Ritchie County and St. Marys joined their conference mate in the field.

But, the Blue Devils are the only team on Doddridge County’s side of the bracket. If Jodi Mote’s group advances past Cameron at 1:30 p.m. Saturday then Midland Trail or East Hardy, it will meet the Bulldogs in the semifinals.

St. Marys will play at home until then.

These two teams last met two seasons ago. St. Marys put on an offensive show in the second half for a 42-14 victory. Mote’s squad would advance to The Island for a second straight year.

The team beating them in the championship game finished with the tenth seed.

Two time defending Class A champion Wheeling Central, who had three games to figure things out following the loss of all-state first-team quarterback Curtis McGhee III to an ACL injury, kick off their postseason with a visit to Tolsia.

The Maroon Knights path back to The Island features possible matchups against the Rebels (second round) and Yellowjackets (semifinals).

Pendleton County versus Moorefield is the other re-match. The Yellow Jackets from the Eastern Panhandle shut out the then-top rated Wildcats, 35-0, Nov. 1 at home.

Williamstown, meanwhile, welcomes visitors from Williamson in Tug Valley. Terry Smith’s Yellowjackets rested last week on a bye. His players have had time to think about a 20-7 loss to Doddridge County in the season finale. The loss snapped their eight-game win streak, cost the group the LKC title as well as home field advantage until the semifinals.

In Class AAA, South and Parkersburg High’s potential path to the championship matchup goes through Martinsburg.

Of course, they have to get there first.

Nathan Tanner, in his first year as head coach of the Patriots, led his team to a 9-1 record and were rewarded with the fourth seed. They can play two home games in the upcoming weeks. Provided they send South Charleston back to the Kanawha Valley with a defeat. Donnie Mays’ group comes in off a 62-21 loss to second-seeded Cabell Midland.

The Eagles do have two wins over playoff teams in Hurricane and George Washington by the identical score of 28-14.

Spring Mills, of course, traveled to meet the Big Reds.

Byus’ group doesn’t get lucky the second time around facing a EP team.

Musselman and standout running back Blake Hartman welcome PHS for a 7:30 p.m. Friday kickoff at the home of the Appleman.

Wins by both the Patriots and the Big Reds sets up a rematch at Erickson All-Sports Facility the following Friday or Saturday. Game time would be decided by PHS as the road team.

If either team advanced, the date with the top-ranked Bulldogs happens the following week.