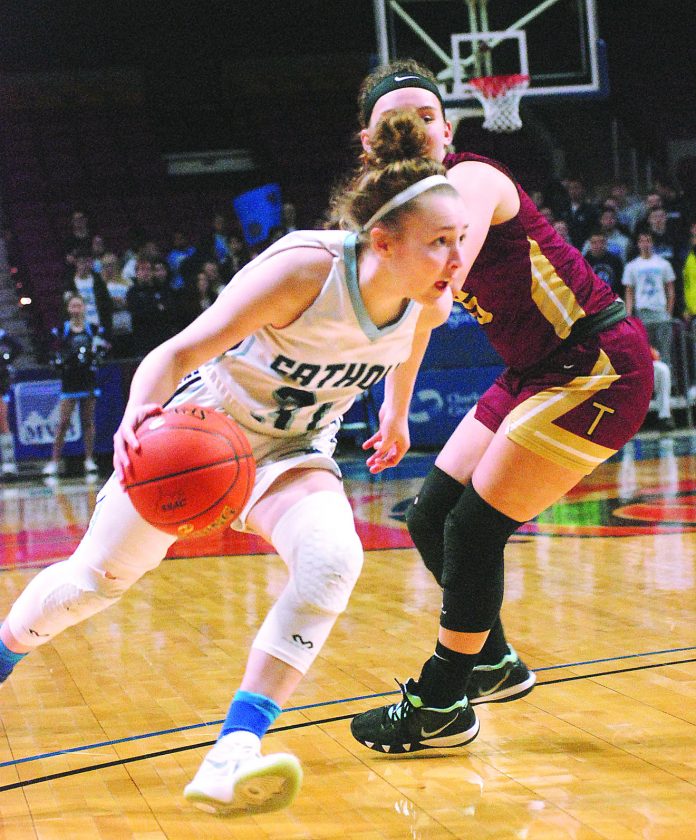 Photo by Joe Albright Parkersburg Catholic’s Madeline Huffman handles the ball during a high school girls basketball game this season. Huffman was named the LKC Player of the Year.

She averaged 15 points on 47 percent shooting, 5.7 assists and 3.5 steals with 49 3-pointers this season on the Crusaderettes’ path to a second-straight undefeated LKC West run and conference title. Her unique skills were a big part in the run to the crown. The leadership displayed unmatched by many players in today’s game.

“Madeline Huffman is a player coaches dream about having once in their career,” he said. “She is that good in my opinion and especially at the point-guard position. The results really speak for themselves.

“She not only handles pressure situations incredibly well but is willing to carry her team if need be. She sacrifices anything for her teammates to be successful. She will make the extra pass instead of shooting sometimes which is a nice problem to have as a coach. She is a tremendous defender and works extremely hard in the offseason.”

To Vierheller’s point about her unselfishness, there was no quest from herself to win this award at any time this year.

“Honestly I did not expect it,” said Huffman. “I was pretty surprised when I heard.”

While Huffman definitely enjoys the honor, she cannot believe where the time went as her final season approaches at Parkersburg Catholic.

“I wish it would slow down,” said Huffman. “It is crazy to think I am about to finish up my junior year. I cannot imagine playing high school basketball anymore. It is sad to think about already.”

She joined a list of three worthy Catholic players along with teammates Aaliyah Brunny and Leslie Huffman. The trio could easily have split the vote as sophomore Brunny averaged 16.5 points, 6.2 boards, five steals with 29 blocks, and 26 3s while shooting 45 percent from the floor.

Coaches though voted largely in lockstep as Madeline finished with 56 total points in the voting. Brunny tallied 35, while Leslie received 29. Next year’s top player race likely will feature this trio in the mix once again as they are all underclassmen.

Brunny repeated on the top unit. Younger Huffman fell to the first spot on the second team.

League runner-up Gilmer County placed freshman Trinity Bancroft on the top unit. Bancroft (9.5 ppg, 1.9 steals, and 19 3s) helped the Titans back to the Night of Champions after a one-year absence.

Rinehart formed a nice down-low duo next to Arnold with 12.5 points, five boards, two steals per game. Smith stuffed the stat sheet for the Bulldogs’ with 12.1 points per game, 5.2 boards, two assists, two steals with 34 3s.