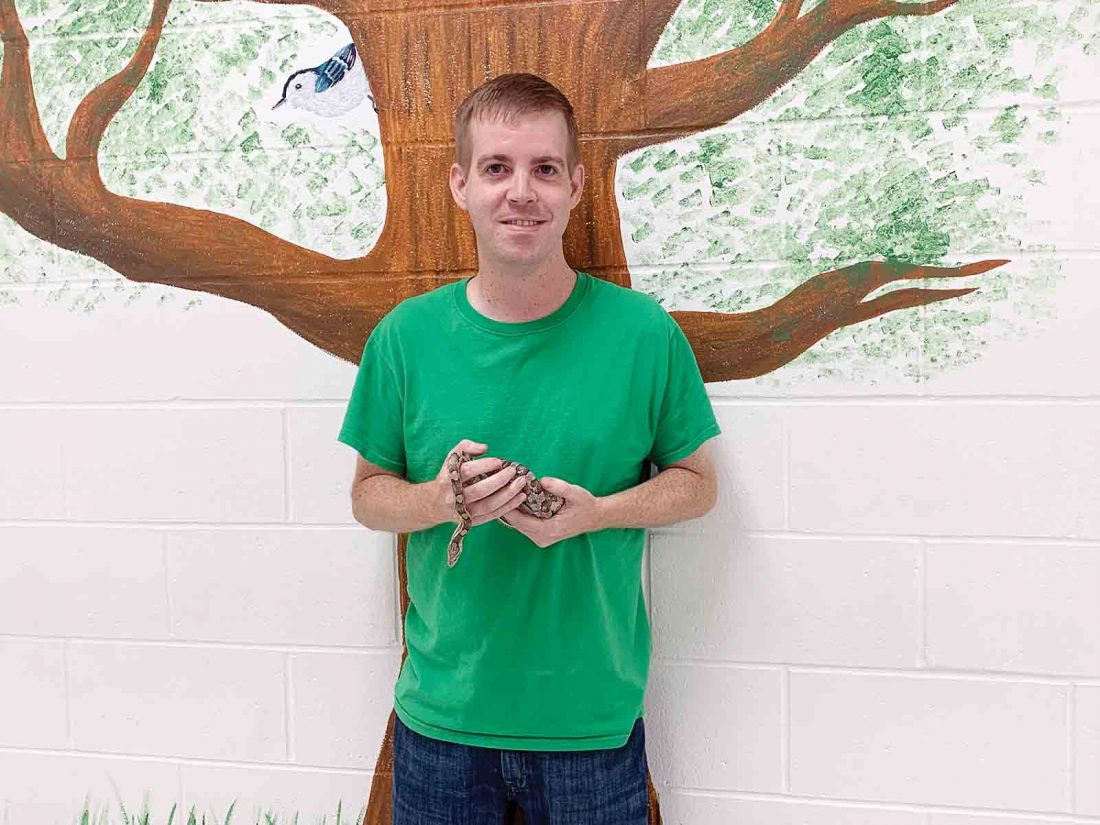 PARKERSBURG — Daniel Jonas, a science teacher at Parkersburg High School, has always had a passion for creatures that are feared or persecuted in popular culture.

It was this passion that inspired him during the 2015-2016 school year to take a leap and propose a program that is rare for high schoolers: herpetology, the study of reptiles and amphibians.

“It is important to know what lives around you and know that you can coexist,” Jonas said about the importance of the course. “It is good to learn how cool the world is and see what is out there.”

Jonas fostered his love for herpetology through his undergraduate education at Marshall University and through his student teaching experience at Huntington High School. To his knowledge, Huntington High is the only other school in the nation with the course available for high school students.

Jonas submitted the idea for the course during the winter of 2015 after he felt established enough as a biology teacher and wanted to expand the horizons of the department. The recommendation was then taken to the Board of Education where Jonas justified the educational value and provided a curriculum.

‘I’ve taught it for three years now,” Jonas said. “Starting out I didn’t have as many animals as I do now, no supplies really and there really isn’t a textbook so I had to talk to Huntington High and build the course on my own.”

Since 2016, Jonas has incorporated guest speakers from organizations such as the Division of Natural Resources, field trips and conservation education into the course. Students also are tasked with the responsibility of learning to care for the animals in the classroom.

Students in the first year of the course went to two schools to show elementary students the animals, Jonas said.

“This past year, we visited five schools and we had around five wildlife trips,” he said.

For 2019-2020, the course will expand under a new name, Natural History. The course will include more topics in addition to caring for animals, birds and native tree species.

The course has become popular for many students and has even piqued the involvement of other faculty in a cross-curricular manner.

“We are going to focus on a lot of science based readings and writings in my class,” said Amanda Slone, an English teacher at Parkersburg High School who has chaperoned on some of the trips. “I think that taking these animals into the public and educating others can teach them not to be scared of something that is just living in their yard and helping them.”

Slone and Jonas added a new addition to the school that will involve students in both of their classes: a garden with the purpose of drawing in wildlife and nurturing the growth of native species.

English students will use the garden as a place to write about their observations and Natural History students will focus on species identification.

So far, species such as milkweed and various garden flowers have bloomed and butterflies have begun to appear. The garden was funded through a Parkersburg High School Foundation grant and plants were donated by the West Virginia Native Plant Society.

Plans include an outdoor classroom area in the future.

“It is good to learn how cool the world is and see what is out there,” Jonas said.