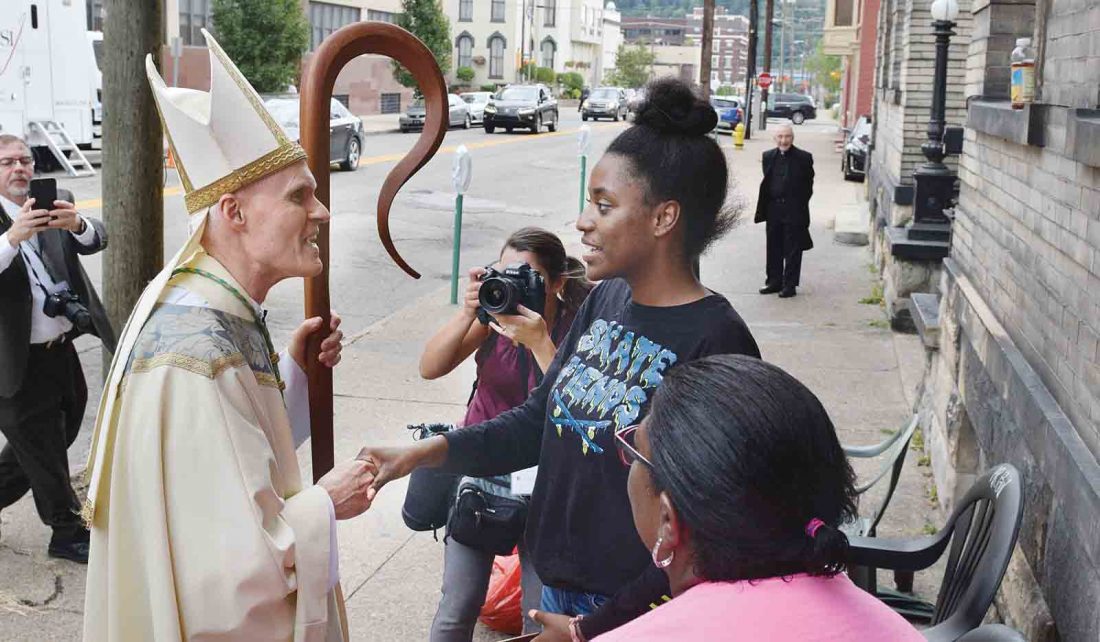 Offering an impromptu greeting after his installation as bishop, the Most Rev. Mark Brennan shakes hands with Zyanne Hamlin of Wheeling on Eoff Street across from the Cathedral of St. Joseph. Looking on is Yvette Smith of Wheeling. (Photo by Scott McCloskey)

WHEELING — Demonstrating a desire to meet West Virginians, the Most Rev. Mark E. Brennan took an unscripted walk to greet onlookers Thursday, minutes after being installed as bishop of the Roman Catholic Diocese of Wheeling-Charleston.

When the installation Mass concluded at the Cathedral of St. Joseph, a smiling Brennan greeted the audience and gave a final blessing from an exterior balcony of the cathedral. Noticing people gathered on the sidewalk outside the Formosa Apartments, the bishop, still wearing his vestments and carrying his official crozier, walked across Eoff Street to chat with a surprised group of women.

Among them was Yvette Smith of Wheeling, who told the bishop she may now attend services at the cathedral.

“I hope you do,” Brennan said.

“Yes, I was shocked that he came over,” Smith said afterward. “We got excitement today. It was beautiful. It was my first time going over (to the cathedral). I got such a wonderful vibe from him (Brennan).”

Zyanne Hamlin, also of Wheeling, held her cell phone as Brennan shook her other hand.

Carrie Chambliss of Wheeling also said she was excited to meet the new bishop.

Brennan returned to the cathedral sidewalk to greet more people and pose for photographs before going to a reception at the WesBanco Arena. After interviews with reporters, the bishop shook hands with a long line of well-wishers and posed for more photos on the arena main floor.

Brennan said it was great to see family, friends and former parishioners.

Among those attending the Mass was Lawrence Bandi, chair of the Wheeling Hospital board of directors and president of Wheeling Central Catholic High School.

“I just feel such a renewed spirit,” Bandi said. “I am excited to work with Bishop Brennan and assist him in any way I can.”

The Rev. Joseph Hazar, dean of St. George Cathedral in Charleston, attended the service as a representative of the bishop of the Antiochian (Eastern Orthodox) Diocese of Charleston and the Mid-Atlantic.

“We pray that God grants him (Brennan) many years and wisdom in shepherding his flock,” Hazar said.

“Just in the few moments that I met with him (Brennan), I could tell he has a very kind and gentle and healing spirit about him, and that’s what the church universal needs,” he said.