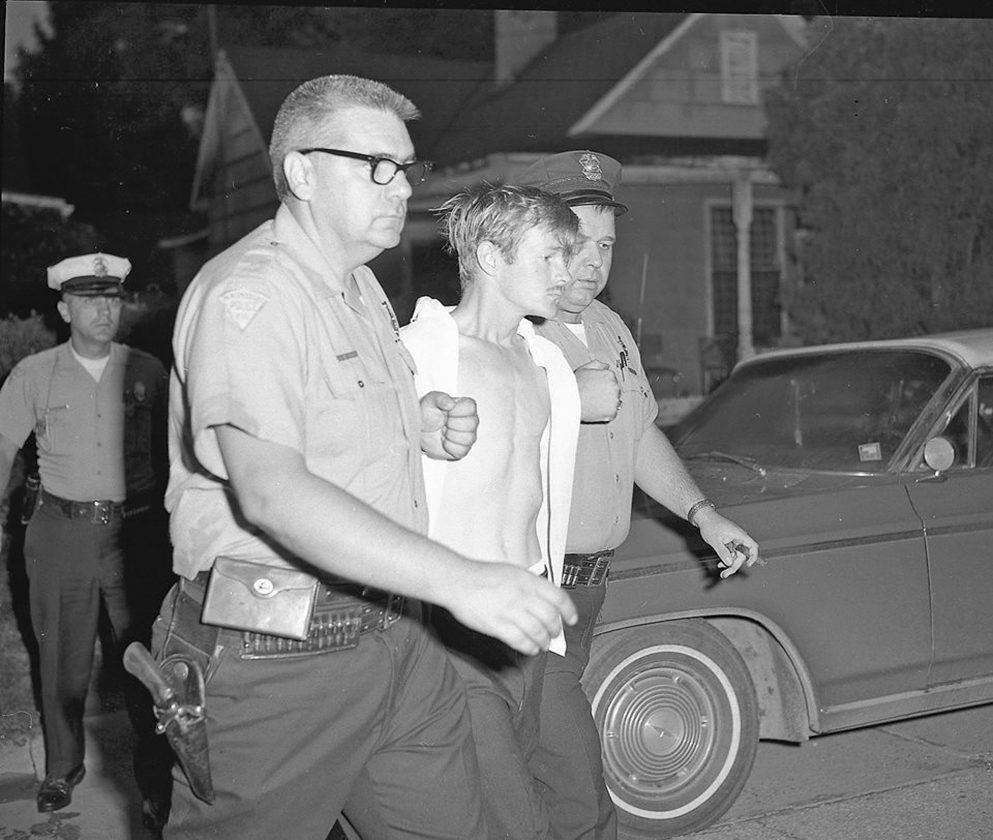 PARKERSBURG — A lone gunman opens fire with a high-powered rifle on a group of unsuspecting people in a commercial district, killing two and wounding three more.

It sounds like the sort of story America has seen unfold too often recently, but this one happened in Parkersburg — 50 years ago today.

“It was a shocking event,” said former Parkersburg Police Chief Larry Gibson, who was a detective in August 1969. “That was an isolated incident for that age. We didn’t have a lot of those happening in the ’60s. But today, it’s almost a monthly or a weekly occurrence anymore.”

Court records, newspaper accounts and a summary of the case written by former Parkersburg Mayor and Police Chief Bob Newell describe the series of events.

Around 3:30 a.m. on Wednesday, Aug. 20, 1969, David Lee Grimm, a 25-year-old Marine Corps veteran who served more than a year in Vietnam, dropped a tear gas grenade into an opening in the door to the Club Ada Bar & Tap on Sixth Street between Market and Avery streets. He then took up a position behind a nearby railroad bridge abutment and opened fire with a rifle as three people fled.

Grimm, clad in military fatigues, was then observed by witnesses “‘marching’ away from the bar with his rifle held high over his head, as if training in a military drill,” Newell wrote.

Grimm reportedly shot at a parking lot attendant and two bank couriers. He made his way toward the UpTowner Inn, firing at three people who ran inside.

An employee of a local plant driving home from work saw Grimm, who allegedly said words to the effect of “I’ve already killed four or five, might as well kill you.” Grimm shot the driver in the neck, seriously wounding him.

Making his way over Quincy Hill, Grimm encountered two teenage brothers delivering newspapers. He said he would not kill them because he was focused on killing “bad people” and African Americans, although he did shoot at their feet and over their heads after telling them to run.

Gibson recalled responding to the scene at Club Ada.

“The odor of the tear gas was still prevalent,” he said. “We had officers out all over the town and processing the scene.”

It wasn’t long before the shooter was identified.

“It was almost immediate,” Gibson said. “Grimm had had some problems, he had had some arguments in the club that night.”

The day before, Grimm, who had reportedly begun drinking heavily after returning from Vietnam the year before, got into a dispute with Hardman at the club. He returned twice that evening and early the next morning and was denied entry both times because he was carrying alcoholic beverages, according to Newell’s account.

One of the people in the club at the time of the shooting was Grimm’s brother, Doug, an employee of the establishment. He and other witnesses identified David Grimm as the shooter, and Doug led police to his brother’s home on Lakeview Drive, where the suspect was arrested around 6:30 a.m. The rifle and other items were found in a creek about three blocks from his home.

In addition to the rifle and tear gas grenade, Grimm had also been in possession of a land mine he’d obtained in the military, Gibson said.

“I don’t know how a person would ever get those things across the border today, but apparently 50 years ago, it wasn’t” as difficult, he said.

Gibson was one of the first detectives to speak to Grimm, who answered basic questions about his personal history. The form Gibson filled out in this encounter would later prove important in subsequent court proceedings, Newell noted.

Roger Mackey, owner of Mackey’s Antique Clock Repair and a collector of local historical photographs, said he remembers the case well. David Grimm and his brothers hung around Mackey’s father’s used car lot in the late 1950s and early ’60s.

“I knew David Grimm very well before he went in the service and Vietnam; that is when he changed,” Mackey said. “He was as nice a person (as) you could ask for back then. I only (saw) him one time when he came home. I was shocked he did this; he just was not that type.”

Grimm was indicted in October 1969 on two counts of murder and one count of malicious wounding. He stood trial in February 1970, entering pleas of not guilty and not guilty by reason of insanity. Testimony by psychiatrists for the prosecution and defense differed as to whether Grimm could be held responsible for his actions. The jury could not agree either, leading to a mistrial.

A second trial in May of that year focused on the murder of Hardman. Grimm testified that he had no memory of the shootings, and a psychiatrist called by the defense said Grimm was mentally ill, attributing it to a head injury he suffered in Vietnam.

Grimm was found guilty of murder and sentenced to life in prison, although with the possibility of parole.

In 1978, Grimm was granted a new trial based on what the West Virginia Supreme Court of Appeals ruled was an improper instruction given to the jury. Once again, he was convicted.

But upon appeal in 1980, the state Supreme Court ordered a new trial because the prosecution had not shared with the defense the existence of the booking record filled out by Gibson. Grimm’s ability to answer these questions in the hours after the shooting was used to counter the argument that he wasn’t mentally responsible in the May 1970 trial.

At that point, Grimm had already been released on parole and many witnesses from the original trial had passed away or moved out of the area. The case was dismissed.

According to Newell, Grimm remained in the area for a few more years before moving with his third wife, Kelly, to Kentucky. On May 22, 2002, Kelly Grimm killed her husband.

“There has never been a case investigated in Parkersburg that had a higher profile than the Ada’s Bar shootings,” said Newell, who was in high school at the time and joined the Police Department as a cadet a couple years later. “The one question that would never be settled by a trial jury would be whether or not Grimm was legally insane when he committed the crimes.”

Rick Stanley, a licensed professional counselor who works with a number of veterans through the Counseling and Wellness Center in Parkersburg, said he was not familiar with the Grimm case but it was likely the man suffered from issues related to post-traumatic stress disorder.

The term — involving nightmares, hyper-vigilance, flashbacks and trouble sleeping — didn’t come into Stanley’s professional lexicon until the early ’80s, though it had been studied under other names dating back to the Civil War, when it was called “soldier’s heart.” Some of these symptoms were exhibited by Grimm after his return from Vietnam, Newell writes.

Stanley said there is much more awareness among mental health professionals and the public about PTSD today. In the late ’60s, there were not as many resources available to deal with it.

Today, Stanley holds two weekly counseling sessions for veterans dealing with PTSD. About 18 people regularly attend, and most of them are Vietnam veterans.

“This is 40, 50 years after the fact, and I still have Vietnam veterans going through PTSD groups,” he said.

Jenna Pierson contributed to this story.