Ministry brings message of hope to inmates in Caldwell 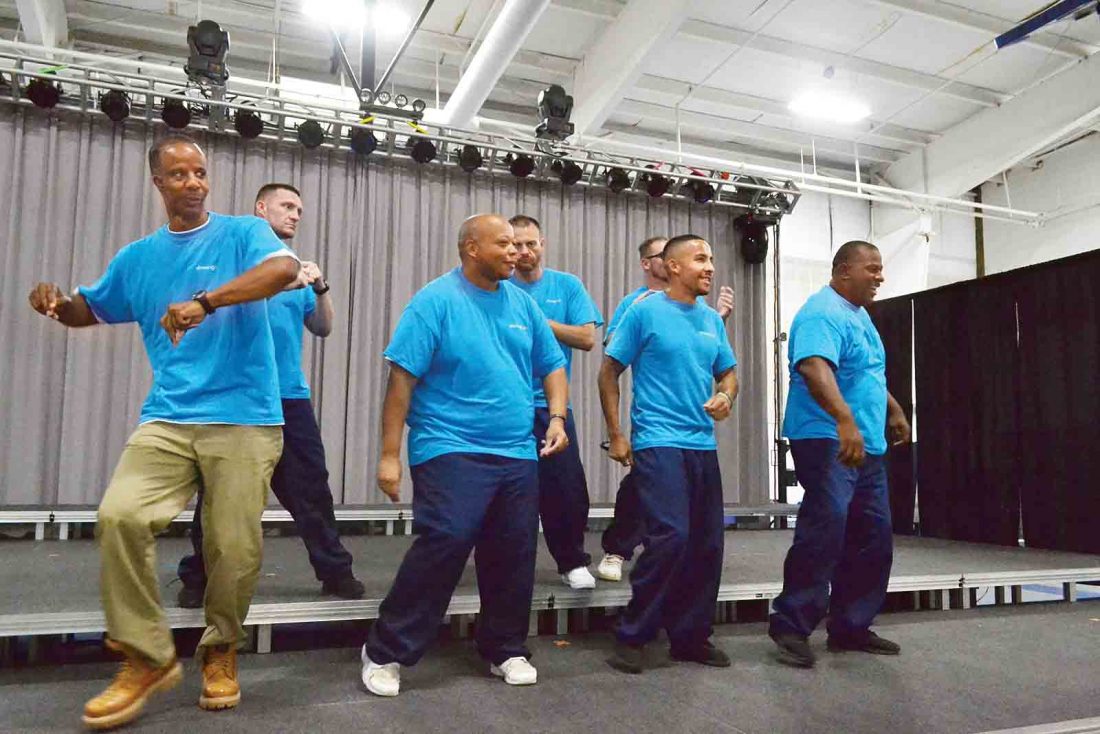 Photo by Michele Newbanks Inmates from the Noble Correctional Institution in Caldwell had a dress rehearsal Friday for a program which provides hope to their peers through music, drama, dance and spoken word.

CALDWELL — Inmates at the Noble Correctional Institution in Caldwell are getting a chance to give back messages of hope to their peers through dance, music, spoken word and drama.

Jeff Bohn, executive director of Shining Light Ministries, and his team have been working with 32 inmates for the last two weeks and their program will be performed today and Sunday for the other incarcerated. A dress rehearsal was held Friday afternoon for family and friends of the participants.

Shining Light Ministries started in 1996 and their team has been to about 70 prisons from San Quentin to Riker’s Island, Bohn said.

“We work with 32 incarcerated men for about 65 hours and they present a message of hope,” he said. “We’ve done this particular program for about 10 different prisons and jails.”

The group has worked primarily in Pennsylvania and New York and this is the first time they’ve worked at a prison in Ohio. Most of the performances have been done in maximum security facilities.

“We had a last minute cancellation due to some health issues with the host,” Bohn said.

It typically takes a year of working with the prison to set the program up, however for NCI, it only took about five weeks.

“A board of directors member, who was a warden at Riker’s Island and was friends with the warden at Noble, gave him a call,” Bohn explained.

Warden Tim Buchanan said the prison has a moral obligation to do the right thing for the prisoners.

“A non-traditional life experience is what enhances the human soul,” he said. “The dedication and pride the men took in their performing made me so proud.”

The men were broken down into four teams, each led by a professional artist from Los Angeles or New York City.

“We bring four professionals working artists with us from New York and Los Angeles. They come in for the two weeks and they work with them to create the program,” Bohn said. “The incarcerated create the drama and the spoken word. So we’re in there seven hours a day with them and there is a discipleship part of it. They watch a short video on ‘what’s my purpose in life’. They discuss it in their small groups, which are led by our artists. We do a lot of team building activities.”

Elgin H., 52, who has served three years and four months of his prison sentence, is involved in the church ministry at the prison and wanted to challenge himself and do something positive with his time as part of the drama team.

“I knew two of the team, which is amazing because now I know 32 of them,” he said. “It’s not just that I recognize them across the yard, but I really know them. It’s really that close.”

He said in prison, you are judged easily and now he’s able to open up more.

“You never know what someone else is going through,” he said.

Bohn said the program isn’t a talent show, it’s about serving others.

“It’s about hope and we want to present a message that impacts their peers. They get new supportive relationships,” he said. “Most of the men didn’t know each other before they came together for this team. They’ve also discovered they can do more than they thought they could, both individually and together. They’ll tell you their faith has grown. Our program is pretty extravagant with the amount of time and resources we pour into it.”

Elgin said he looked forward to practice every day and that he’ll never forget what he went through with his team.

Derick B., 36, who has served 21 months, was part of the spoken word team and said he’s going to take his new-found confidence with him when he finally leaves prison.

“It’s given me the confidence to go out and be a counselor’s advocate for alcoholics,” he said. “I can say what I’ve been through in my life.”

He said the program has meant the world to him now that he’s gone through it. There were people he didn’t associate with, but it’s brought unity to the group.

“Everyone’s story is slightly different, but we have the same struggles,” he explained. “But now we are family.”

Some of their struggles played out during the spoken word sections of the program. The team first spoke of hope, talking about their wives and children, but then the lighting turned red. They then spoke of when their lives fell apart and the struggles they had with gangs, dealing drugs, alcoholism, depression and violence.

The drama team had a skit that started the same way. They talked of their childhoods, where “bacon frying in a pan” and “a shot from a starter gun at a track meet” were their memories. It quickly became more about the sounds of regret, which took on the forms of gun shots and sirens.

The men who participated in the program were volunteers who didn’t have to be Christians, although “we share hope through Jesus,” Bohn said.

“Many times we have Muslims or those from other faiths participate,” he explained. “Our goal is not to see people saved or converted through our presentation, but we are about bringing hope.”

He noted 20 percent of the inmates they’ve worked with are serving life without parole, so hope is something they need.

“I’m amazed each time at what the inmates can do and the long term impact it has,” he said.

Having something positive to do with their time and having positive people to work with is been a good thing for the inmates. It makes them feel less like a number and more like a person.

“One of the biggest things they comment on is we call them by their first names,” Bohn said. “One guy commented Thursday that he hadn’t been called by his first name in over a year.”

After the program, the participants gave words of encouragement that they’ve learned.

“Never give up,” one inmate from the dance team said. “Know God is with you. Stay positive in everything you do.”

One inmate thanked the audience, which was mostly family members of the participants for “not forgetting us or giving up on us.”

Another inmate said his words for his peers would be to “find somebody, even if it’s one person, that you can trust and make them part of your family.”

Bohn said they have had dozens of performances over the years, but this was only the second one with perfect attendance.

“One had a tooth pulled and went back to rehearsal. One was sick and came to rehearsal and sat on the side when he needed to,” he said. “That showed their dedication.”

Buchanan said he was told by one of the participants that this was the first time he had committed to something ever.

“That they must commit was fundamental for participants,” he added.

The workshop costs about $75,000, which is $2,500 per person typically, Bohn noted. The group feels this is a year-long rehabilitative program packed into two weeks.

After the intensive program, the Shining Light team goes back to the prison to check in on the inmates to see how they have progressed.

He said the inmates also report that they think more highly of the prison staff.