All eyes on governor as Justice preps for highway funding announcement 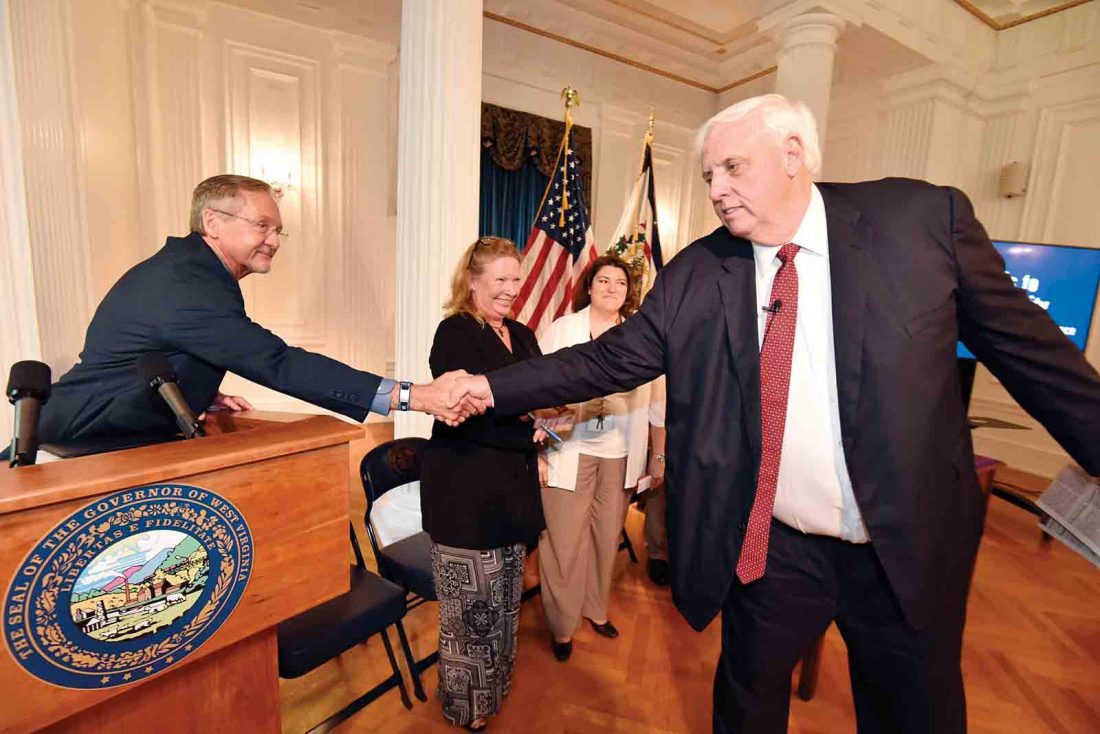 CHARLESTON — Gov. Jim Justice is set to announce a plan for secondary road maintenance today, but a cloud hangs over the announcement with the firing of the Department of Transportation secretary.

Justice is slated to announce a plan for accelerated maintenance and repairs, the details of which have not been laid out, but Justice said he was putting his foot down on continued neglect.

“There is no doubt the Department of Transportation is doing great work on our Roads to Prosperity projects, but our secondary roads aren’t being addressed with the urgency needed,” Justice said. “This is the issue that we will address with this plan, and secondary roads will be the No. 1 priority of the department.”

“I want a new direction to be taken with our Department of Transportation, a return to the core mission of maintaining the quality of our secondary roads and bridges,” Justice said in a statement Sunday. “I sincerely appreciate the service Tom has given to the state of West Virginia.”

Previously, Smith was an engineer and 37-year employee of the Federal Highway Administration, serving for a time as administrator for West Virginia projects. He was also a senior transportation adviser to the Appalachian Regional Commission.

“Our roads and bridges are crumbling, and Tom Smith is the right choice to spearhead the effort to upgrade our transportation infrastructure,” Justice said in a statement when he appointed Smith as secretary in January 2017. “Tom is the right man to help me fix our roads and be responsible with every dollar of taxpayer money.”

Speculation has run rampant on why the sudden departure of Smith in the middle of the Roads to Prosperity project, expected to generate $2.8 billion in funding between bonds and increases in fees and taxes for major highway construction projects and bridge repair. However, the last six months the public has made it clear they also want to see asphalt replacement, pothole repairs and ditch maintenance on non-federal secondary roads.

State Sen. Randy Smith, R-Tucker, was one of the loudest voices in the Legislature calling for more attention for secondary roads.

He introduced Senate Bill 522, also known as Randy’s Dream, which creates a special road repair fund. The secretary would have authority to put in $80 million in the fund from unneeded bond debt service monies.

“I’m disappointed to see that Tom Smith seems to be the scapegoat for unfulfilled promises by Gov. Justice to take care of the terrible condition of West Virginia’s roads,” Smith said. “For three years, the governor didn’t provide Tom Smith with the avenues he needed to fix this problem. Only when others came up with ideas and legislation to fix the problem with real solutions did the governor feel compelled to act.”

As of September, $200 million has been spent to complete 250 smaller projects. According to the DOT’s DriveFowardWV website, another 119 projects are in the construction phase and nearly 250 projects are in the design phase. This includes $172 million for 26 bridge rehabilitation and renovations projects on I-70 in Ohio County, which was sent back to the drawing board and reduced in scope after bids came at nearly $275 million for the project.

Sen. Smith believes that voters leading up to the October 2017 special election on the Roads to Prosperity bond amendment were misled on what the road bonds would be used for. He also believes that the goal of the bonds was to free up state money for secondary road maintenance.

“When he aggressively pushed his road bond campaign in 2017, thousands of West Virginians were sold on the concept that these bonds — which would obligate the state to up to 25 years of new debt — would free up the necessary State Road Fund money to take care of our secondary roads,” Smith said. “It’s painfully obvious that didn’t happen.”

A report released last month from the Legislative Auditor’s Office found that the state’s 10 Division of Highways districts spent well below the 70 percent required in their budgets for core maintenance activities, such as paving, pothole repair, mowing, and ditch maintenance since 2012.

During his State of the State address Jan. 9, Justice proposed taking road bond monies meant for the major Roads to Prosperity projects and using the funds for secondary maintenance. By the end of January, Smith said no decision had been made to do that.

Sen. Smith said he hopes today’s press conference is not a roll out of that kind of plan.

“If this big announcement is to use road bond funds to fill potholes, that’s not what those bonds were intended to be used for and that’s not what the citizens of this state were sold,” Smith said. “It’s absolutely irresponsible to use the public’s money to pay 25-year notes on pothole repair.”

Smith makes the third cabinet official to either resign or be forced out. Former Commerce Department Secretary Woody Thrasher resigned after it was revealed that his department mishandled a flood recovery and rehabilitation program. Alan Larrick, the former director of the West Virginia Lottery Commission, resigned the day before sports betting went live in West Virginia.