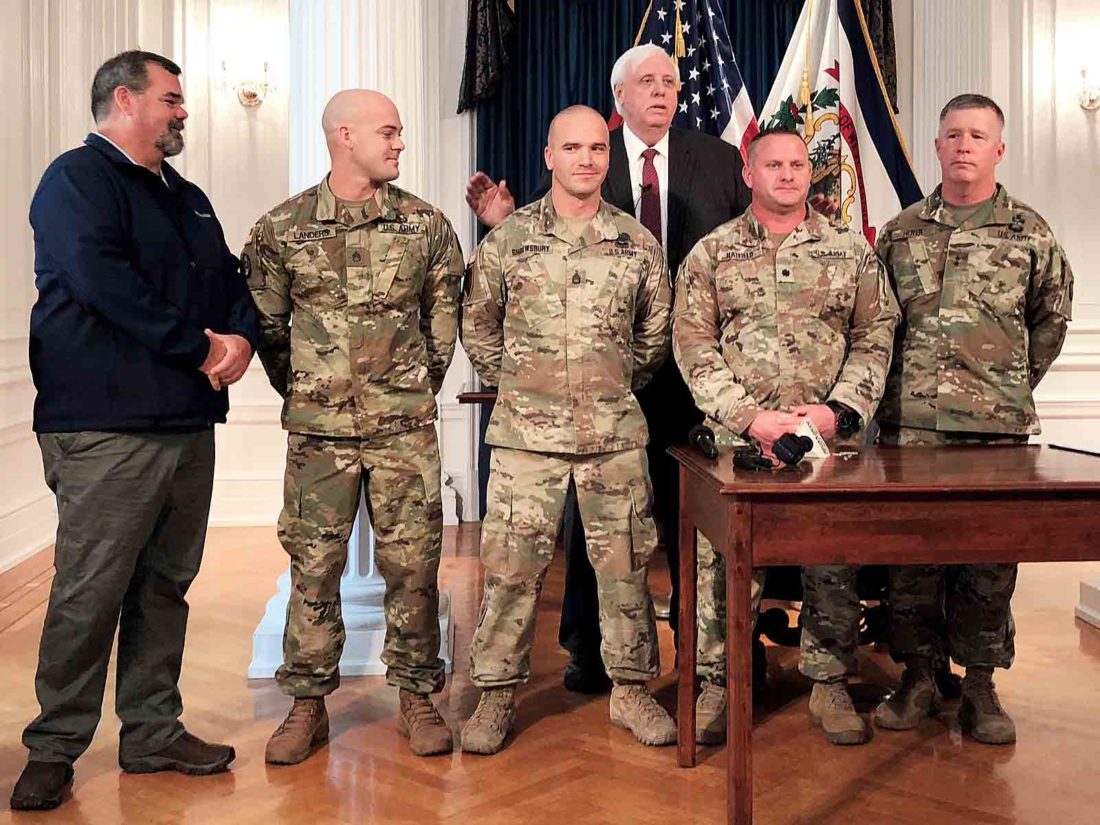 CHARLESTON — Gov. Jim Justice said Monday that he is letting the West Virginia Legislature decide the next steps after a ruling put a stop to the impeachment trials of two justices and one former justice of the state Supreme Court of Appeals.

Justice made the comments during a press conference Monday at the Governor’s Reception Room at the state Capitol.

“I thought a lot about it. The Justice Loughry thing is terribly unfortunate in many ways. Especially unfortunate to the State of West Virginia,” Justice said.

Justice Allen Loughry was convicted of 11 felonies by a federal jury on Oct. 12. He also faces a 33-count complaint from the state Judicial Investigation Commission and seven articles of impeachment. Loughry originally scheduled to face an impeachment trial before the state Senate Nov. 12, his attorneys have asked for his trial to be halted based on a supreme court ruling halting the impeachment of Chief Justice Margaret Workman.

“I wish to goodness that Judge Loughry would just do what seems to be the right thing,” Justice said. “I don’t portray to know every little detail, but it just seems to me like the right thing is resignation and go on down the road.”

An all-appointed panel of circuit judges acting as supreme court justices ruled Oct. 11 that the impeachment of Workman violated the separation of powers between the judicial and legislative branches, and the House didn’t follow the rules of procedure it passed in June to govern its impeachment procedures. Former justice Robin Davis, who resigned the day after being impeached, has filed a federal civil rights suit and has also asked to join in Workman’s petition.

Paul Farrell, the acting chief justice presiding over the remaining impeachment trials, issued a ruling Oct. 15 continuing the trials indefinitely. The Senate is considering filing a motion asking the supreme court to reconsider the decision, with the House possibly filing its own motion to intervene.

Another special session could be called to allow the House to correct the issues with the articles of impeachment raised by the court. Justice said he is letting the legislature decide the next steps.

“The House needs to do their job, and they will. The Senate needs to do their job, and they will,” Justice said. “Those people need to speak and those people need to find direction without me imposing my wishes on them at this point and time. We got thrown a curveball that no one really would have expected by the judges who came out with the ruling probably 10 days ago. From that, I think it would be horribly unfair to intervene prior to the House and the Senate not working through their situations. That’s what they need to do, and they will because they’re really good.”

Justice expressed concern at the damage the supreme court drama was doing to West Virginia and the state’s image on the national and international stage.

“What I hate about it more than anything is it puts a national eye on West Virginia that’s not good,” Justice said. “Don’t get me wrong, I don’t begrudge in any way the reporting of what we’re talking about. But I’m just cautioning all of us that if someone comes running out of a building and says that Judge Loughry has grown another foot and he has three feet, it doesn’t need to be all over the national news.”

Before opening up the floor to questions, Justice announced the awarding of several million dollars of grants for projects in southern West Virginia, including sidewalk repair projects in Hamlin, Gilbert and St. Albans and the building of an elk viewing platform and visitor center in Logan County.

The bulk of the grant announcements were for projects for the Hatfield McCoy Trails system spanning multiple counties in Southern West Virginia, including $1.5 million in an Abandoned Mine Land Grant for phase two of construction of cabins and river access on the Little Coal River, and grants for trail construction and maintenance in Boone, Wayne and Lincoln counties.

The guard will also be teaming up with SPEC Rescue, a search and rescue training company, using the Hobet site and the guard’s emergency training center at the old Memorial Tunnel on the West Virginia Turnpike.