No stopping Kenyan Julius Kogo at News and Sentinel Half Marathon

Wins race for the eighth time 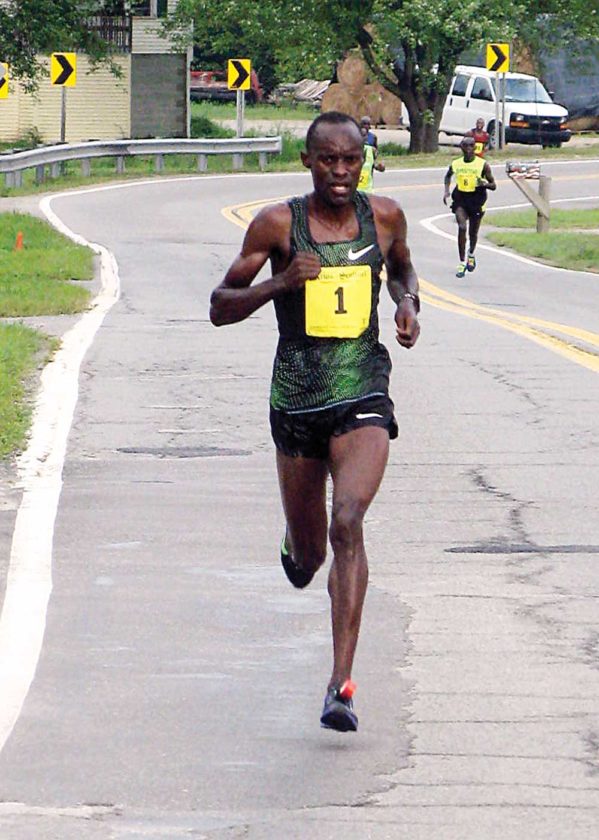 Photo by Jay W. Bennett Kenyan Julius Kogo topped the field in the 32nd running of The News and Sentinel Half Marathon.

PARKERSBURG — Not even 92 percent humidity could stop Kenyan Julius Kogo during Saturday’s 32nd running of The News and Sentinel Half Marathon.

For the third straight summer and record eighth time overall, Kogo topped the field in the 13.1-mile race by finishing with a time of 1 hour and 4 minutes flat, which allowed him to take home the $3,000 first-place prize money.

Runner-up honors and $2,000 was claimed by Louisville’s two-time steeplechase All-American Edwin Kibichiy. The Kenyan finished just off Kogo’s pace with a time of 1:05:19.

On the women’s side, the top prize money of $3,000 went to first-time winner Delvine Meringor of Kenya as she crossed the finish line in 1:10:12.

All four of the top female finishers were from Kenya. Vicoty Chepngeno claimed the runner-up spot with a clocking of 1:13:25. She was followed by Brilliant Jepkorir (1:14:52) and Susan Jerotich (1:16:43).

A familiar name finished as the top American male — new United States citizen Alene Reta, who placed fifth overall but previously had three-peated as champion in Parkersburg from 2007-09. He finished in 1:07:49 and earned $1,000 while the second American was Colorado’s Fernando Cabada, who crossed in 1:09:41 to claim $500.

The same prize money for the women went to top American Sarah Biehl of Hilliard, Ohio. She was sixth overall with an effort of 1:20:34. Finishing right behind Biehl as the second American was New Mexico’s Malika Camacho.

Sharon Marks, of Parkersburg, as well as well Lee Stough of Glassport, Pa., grabbed $200 apiece as the women’s and men’s respective half marathon walk champions.

CHARLESTON - As cases of the coronavirus spike across the country and in West Virginia, Gov. Jim Justice said he is ...