Donations were accepted at the Borg-Warner charitable golf scramble Friday morning to go toward restoring and displaying artifacts of the plant. (Photo by Candice Black)

Ralph Chambers, left, and Tom Wiseman, former employess of Borg-Warner, want to educate the community about the history of the plant. (Photo by Candice Black)

Nick Witlow authored “The All-Plastic Car: The Saga of the Marbon Chemical CRV and AMT Piranha.” (Photo by Candice Black)

The car is hoped to be brought back to its original state as pictured. (Photo Provided) 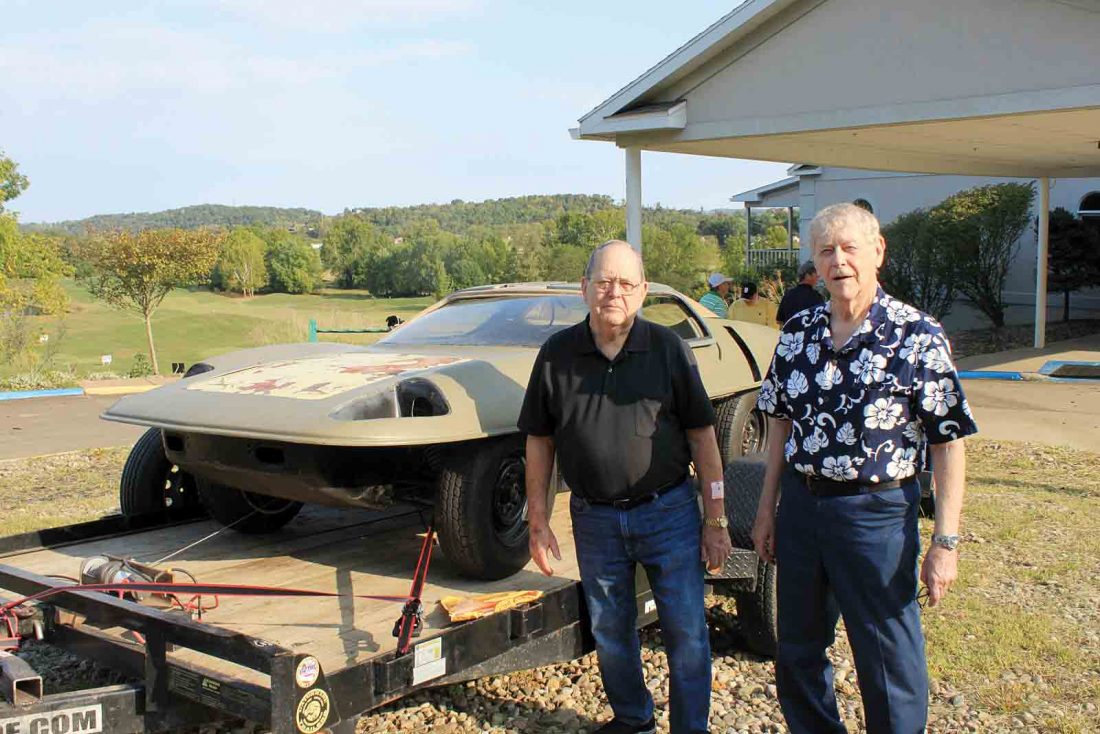 Ralph Chambers, left, and Tom Wiseman, former employess of Borg-Warner, want to educate the community about the history of the plant. (Photo by Candice Black)

MINERAL WELLS — The history of the Mid-Ohio Valley is hoped to be more readily available to residents as the former employees of the Borg-Warner plastics plant try to raise funds to restore artifacts from the plant and to work toward a space for them to be displayed.

On Friday morning, a golf scramble was held at Woodridge Golf Club in Mineral Wells to help raise the money for the project.

The Borg-Warner Chemicals plant was located in Washington, W.Va. It was sold to GE Plastics in the late 1980s.

According to Ralph Chambers, former employee of the plant, Borg-Warner put $100 million a year into the Mid-Ohio Valley’s economy.

During the scramble, a Cycolac Research Vehicle was on display that originated from the Borg-Warner plant. The golf scramble was planned for the proceeds of the event to go toward the restoration of the car. 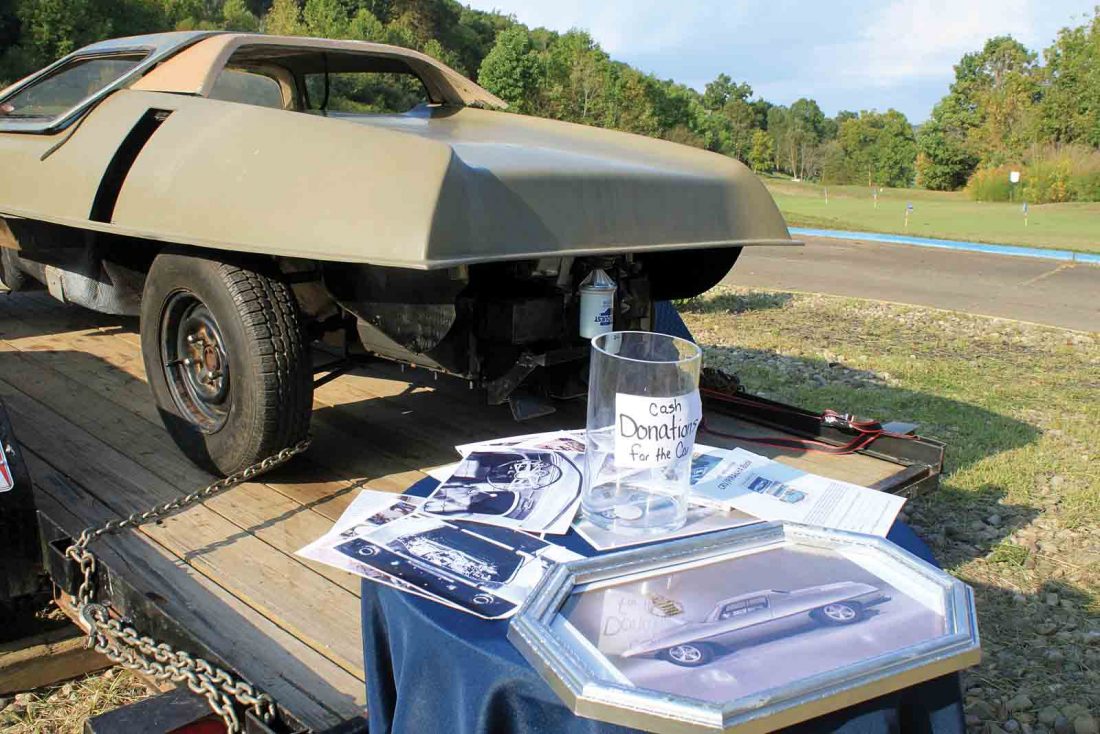 Donations were accepted at the Borg-Warner charitable golf scramble Friday morning to go toward restoring and displaying artifacts of the plant. (Photo by Candice Black)

Chambers said Borg-Warner sent an idea for the CRV to Centaur Engineering in Detroit, which built prototypes. “They did the design work and initial construction and Borg-Warner just funded it,” Chambers said.

The intent of the car was to show the automobile industry what could be done with plastic in the car industry, Wiseman said.

For the car restoration, wiring and body work will need to take place. Wiseman said they are working with the Pontiac Museum Group to do the repairs.

In the condition that it’s in, the car was valued at $50,000. “We obviously could not pay that kind of money for it,” Wiseman said. “So we got the price down to where we could afford it.”

Bruce Jones, the previous owner, wanted the group to have the car so he reduced the price, Wiseman said. 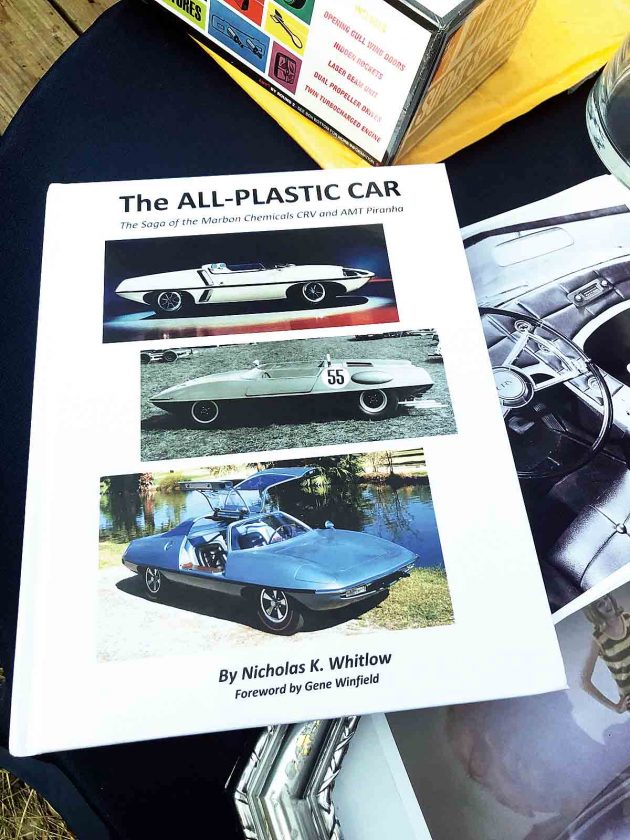 Nick Witlow authored “The All-Plastic Car: The Saga of the Marbon Chemical CRV and AMT Piranha.” (Photo by Candice Black)

Jones, a design engineer for Crysler, builds cars and takes them to car shows.

Wiseman said Jones purchased the car not knowing what it was and posted a picture to find out more information. Nick Whitlow, author of “The All-Plastic Car: The Saga of the Marbon Chemical CRV and AMT Piranha,” immediately recognized it was a CRV and contacted Wiseman saying the car was available.

Only five were made and only two are remaining: this one in North America and the other in Europe.

In terms of a museum, the only place to set up shop was the Oil and Gas Museum in Parkersburg, Chambers said. Paul Hoblitzell, president of the Oil, Gas and Industrial Historical Association Inc., invited them to work together temporary until a bigger facility became available.

If there’s enough room, the goal is to house the car at the Oil and Gas Museum once it’s restored, Chambers said. 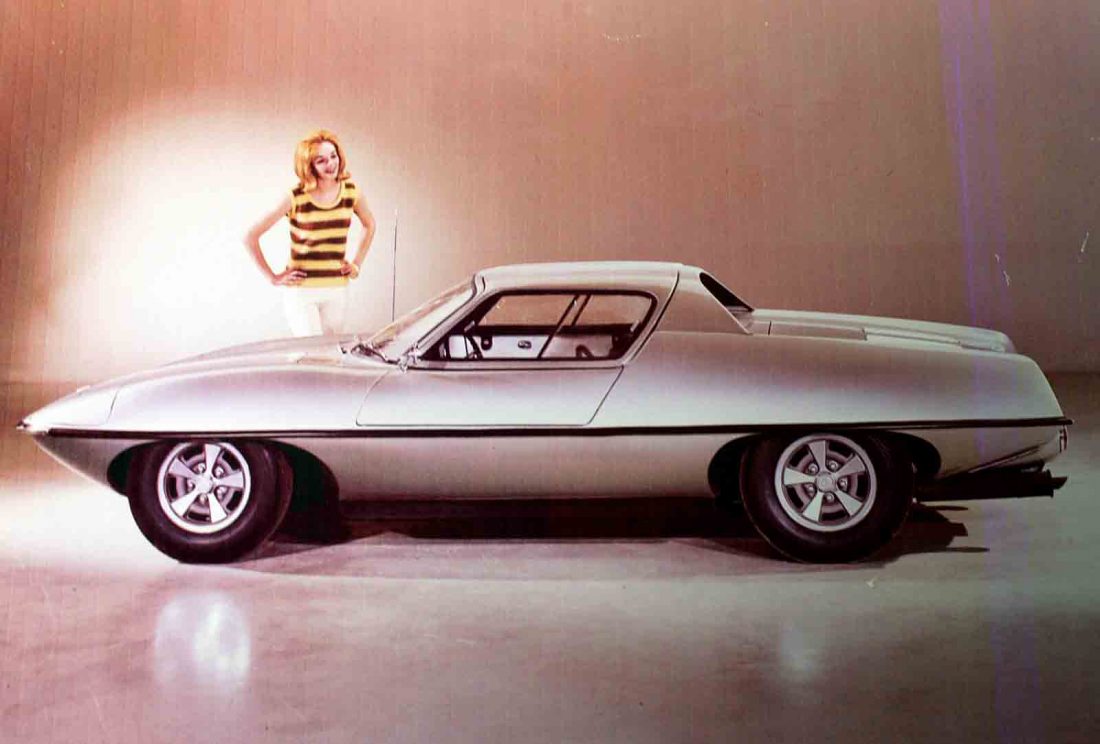 The car is hoped to be brought back to its original state as pictured. (Photo Provided)

Wiseman explained some of goals in terms of a larger space for their artifacts. He hopes a welcome center will be placed downtown that could feature a museum wing full of artifacts from the plant.

“The idea would be that if we could get a building, we could fill the building up,” Wiseman said. They are in contact with Syracuse University, which has the largest collection of historical plastic in the world, Wiseman said. If a building were available, those artifacts could be on display.

Chambers explained the importance of sharing the history of Borg-Warner. The CRV “is an artifact of a corporation that no longer exists and that’s the shame of it. The whole idea of this museum isn’t so much to display some artifacts; what we really want to do long term is create a history of Borg-Warner Chemical and what they did for the Mid-Ohio Valley,” Chambers said.

The goal, according to Chambers, is to tell the history of the corporation so that for years to come, people will be able to learn a piece of community history they didn’t know previously.

“What we want to do is make sure that Borg-Warner has a very prominent place in the middle of that industrial museum,” Chambers said.

Candice Black can be contacted at cblack@newsandsentinel.com