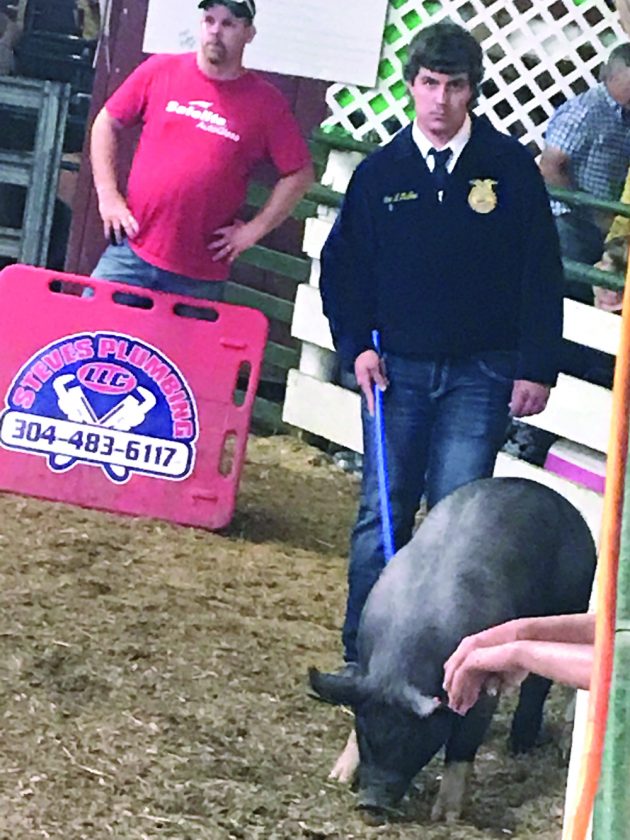 ELIZABETH — The giving nature of a small community was shown at the livestock sale during the Wirt County Fair on Aug. 9.

Earlier this year, the community mourned the loss of LynLee McFee, a baby girl who lost a battle to a rare form of cancer.

Her brother, Glen McFee, raised over $10,000 from the sale of his two hogs at the fair with intentions of gifting the money to the Ruby Memorial Children’s Hospital were LynLee received treatment.

The decision to donate the money had a lot to “do with when my sister was in the hospital,” Glen said. “We lived in the hospital for the most part and they made sure we were comfortable and had nothing to worry about and they took good care of my sister. I feel like they did everything they could.”

Being a member of 4-H since the age of 7, Glen has a long history of working with animals and was required by the FFA organization at Wirt County High School to do a yearly project. The McFee family could not have ever imagined that the project would have turned into something of such great impact.

John Workman, FFA Director at Wirt County High School, said “Glen had come to me the day of the weigh-in and he told me he and his parents had talked about making a donation after the hospital treated the family so well.”

The McFee family did not expect such a large amount of donations for the hogs. Amy McFee, mother of Glen and LynLee, said “[We] only thought it was going to be a couple thousand. The family was going to add to it.”

The family, after raising money from various benefits and events, decided to double the contributions that resulted from the sale. The McFees will be sending around $20,000 for the benefit of the WVU Medicine Children’s department.

This particular hog sale was different than most. During the weigh-in, Glen told Workman his plan to donate the money to the hospital.

“We announced that before the auction ever started and it was immediate that people understood that it was for something bigger,” Workman said. “I just kind of stepped back in awe [thinking] this is what people are doing from this little community.”

Glen said that when he “was in the ring, it was kind of like a scene from a movie, it was just like time stopped.”

For Amy, the sale was an emotional experience.

“When I saw what was going on it was just very overwhelming and emotional. It takes your breath,” she said.

Cardinal Pharmacy, located in Elizabeth, bought the first pig. They then decided to sell the pig back to continue the auction and to raise additional funds. According to Workman, when the second time hog sold it went for well over the average amount. Several other businesses and individuals came forward and gave $200 toward the cause.

With a personal connection to the WVU Medicine Children’s facility, Workman stated the importance of it as a resource for the state. He felt the community understood that “we have to invest to keep this facility here [so] that people still have that go back to,” he said.

Due to the nature of the donation bracket, the McFee family was able to decide what happened with the money they’re sending. They decided to provide the children at the hospital with something that helped their beloved baby girl and their family have an ounce of joy during such a terrible time.

“My sister would sit at the fish tank and it would keep her occupied. It’s something to take your mind off what’s really going on,” Glen said. “That was her favorite thing to do was sit and watch that fish tank but it was on the other end of the hospital.”

The plan is to fund a high tech fish tank that is mobile and can be taken to the kids’ rooms so they can enjoy the fish if they’re not able to get out of bed. Amy had already been in contact with the hospital when they told her that they were working on building a new children’s hospital.

“It all just fell together that we got this money and had this idea, and it worked,” she said.

Amy and Glen explained the impact this sale and other donations have made on her family.

“I think it changes who we are as people. By them seeing all of this good, it’s going to make them better people and it will show them that we can do this together and we will try to do to other people what they’ve done for us,” she said.

Glen also said “I don’t think twice about helping people now, no ifs ands or buts about it. If somebody needs help, they get it if I can. I can’t thank everybody enough for all that they’ve done for us. Not just at the hog sale but when my sister was sick.”

The family plans to set a date to go to Morgantown and present the money along with a plaque including LynLee’s name and picture and include everyone’s name who donated. A celebration ceremony for LynLee will also take place in Morgantown this fall, Amy said.

The first pig, after being bought initially by Cardinal Pharmacy, was purchased a second time by Kent Welding who then donated the pig to the fire department. The second pig was purchased by Piggy Wiggly in Elizabeth and donated to the Wirt County High School band.

Candice Black can be reached at cblack@newsandsentiel.com